Shadow on the Mountain by Margi Preus 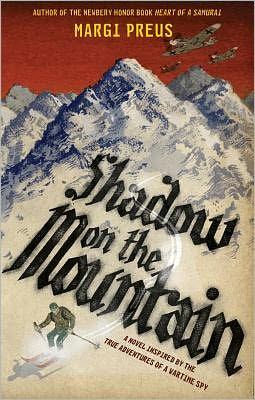 Margi Preus has written lots of books for young people, including the Heart of a Samurai, a 2011 Newbery Honor Award winner.  This fall she has another wonderful book coming out about a young boys participation in the Norwegian Resistance in World War II.
Shadow on the Mountain begins in October 1940, five months after the German invasion and occupation of Denmark and Norway on April 19, 1940 and finishes just before the war ends.  It is written from the perspective of Espen, 14, his younger sister Ingrid, his former best friend Kjell and his newest enemy Askel.

While riding his bike one evening, Espen is stopped by a car full of Nazis. As they search his rucksack, Espen notices that Kjell is sitting in the car and wonders why.  Eventually, the soldiers let him go on his way, believing he is on his way to visit his uncle.  In reality, Espen is carrying coded information for the Norwegian Resistance, his first task as part of this group.  After successfully delivering his information, he receives his code name - Odin, after the Norse god.  And so begins Espen's new life as a boy to the world, an operative to the Resistance.

Ingrid has been keeping a diary of the events going on in her village since the Nazis arrival, even though it is illegal to write or read anything against the regime.  But Ingrid has also stolen some ration cards and uses them to help feed some of the starving prisoners held by the Germans.

Kjell denies having been in the German car when Espen was stopped, but seems to have sympathetic leanings towards the Nazis.  Or does he really?  Well, suddenly his grandmother has no trouble getting the medication she needs so badly despite shortages.

But there is no doubt that the naturally mean-spirited Askel is completely sympathetic to the Nazis and that he hates Espen, especially after the joke he played on him during a soccer game.  Now his goal is to move up the ranks with the Nazis and to catch Espen at the illegal activities Askel suspects him of taking part in.

The novel runs until the end of the war and follows the lives and activities of each of these characters, though it is Espen who is the novel's main protagonist.  Preus has set the tension bar quite high and succeeded in producing a well researched, well documented work of historical fiction that had me on the edge of my seat in a number of places.  Each passing year is introduced with a quote relevant to the situation in Norway, by either a Nazi or an anti-Nazi Norwegian and is followed they the activities of each of the four characters.

I read an uncorrected proof of Shadow on the Mountain, but when it is published in September 2012 it will be chock full of relevant photos, maps and other bit of archival information and I can't wait to see them.  There is also pronunciation guide for Norwegian names and words, followed by a brief history of the Germans in Norway in WWII and, because more Norwegians were not sympathetic to the Nazis, the resistance organizations that sprang up as a result.  Norway was important to the Nazi cause, and when Hitler talked about the perfect Aryans he was really speaking about the Norwegians, with their blond hair, blue eyes and fair skin.  It was his hope that Germany and Norwegians would marry and produce a real master race together.  All of this comes out in Shadow on the Mountain.

At the end of the novel, Preus has written about the events in the story and their real-life counterparts.  For example, Epsen was based on Erling Storrusten, a young boy in the resistance. whose fascinating story can be found here.  Also included is a time line and suggestions for further reading.

But my favorite piece of back matter in Shadow on the Mountain is called Bonus for Code Breakers.  Codes of all kinds play a part in many of the novels written about WWII, especially in resistance stories and here Preus explains how a particular code works and how kids can do it, as well as ways to make invisible ink.  I can remember doing these when I was a kid and learning to love the secret nature of codes.

I would say that All in all, this is a powerful suspense story, not to be missed by any who likes that kinds of historical fiction.

This book is recommended for readers age 12+
This book was received as an E-ARC from netgalley.com

This is book 6 of my European Reading Challenge hosted by Rose City Reader
Posted by Alex Baugh at 7:00 AM