The Other Half of Life by Kim Ablon Whitney 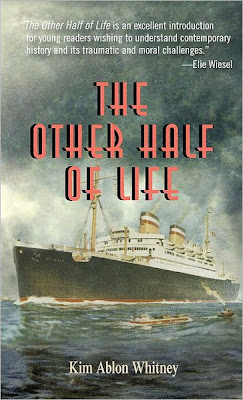 In 1939, 930 German Jews set sail across the Atlantic Ocean on the MS St. Louis in the hope of escaping Nazi persecution in Germany and of finding political asylum in Cuba.  The trip was costly to begin with, and then Cuba demanded $500 additional dollars that the refugees couldn't afford to pay.  The ship proceeded to the United States and Canada, but both countries refused to grant asylum to the Jewish refugees.  The captain of the St. Louis had taken it upon himself the make sure the passengers were treated with dignity while crossing the Atlantic, and when they were refused admittance into these three countries, he again took on the responsibility of finding asylum for all his passengers, refusing to return to Germany until this was done.

The Other Half of Life is a fictionalized version of this event.

Thomas Werkmann, 15, is traveling alone on the MS St. Francis from Germany to Cuba because his Jewish father is in Dachau and his Christian mother could only afford to buy one tourist-class passage and landing permit.  On his first day at sea, Thomas meets Professor Affeldt, his wife and two daughters Priska, 14, and Marieanne, 10.  They are traveling first class and pass Thomas off as their cousin so that he can join them for meals.  It doesn't take long for Thomas and Priska to become friends and to meet other kids their age on board ship.

Priska and Thomas couldn't be more different.  Throughout the voyage, Thomas is skeptical about whether or not they will be admitted into Cuba, while Priska firmly believes that they are finally "saved" from Hitler's persecution of Jews.  Yet despite her infectious optimism and faith, Thomas continues to say he will not believe they are "saved" until they are safely in Cuba, making him metaphorically a Doubting Thomas figure.  And, of course, we know from reality that they never are allowed to enter Cuba, but that isn't the end of the story for Thomas.  Whitney's takes us much further than the Cuban port in her version of the story.

I found this to be a fascinating fictionalized version of the real events in this coming of age novel.  In the space of a two week voyage, Thomas learns much about people, life and himself, much of this occurring in his games of chess with various opponents.  Chess is a game his father had taught him and Thomas was quite good at it.  He even took a pawn from his father's chess set and carried it around in his pocket.  Though I don't play chess, I could still follow the games progress and how each one contributed to Thomas's growth.  Slowly, he learns that sometimes people are not who they appear to be, including himself and even Priska, with whom he falls in love with Priska.

The Other Side of Life is an energetic novel, well-written with well-developed characters.  At times I found myself annoyed with Thomas's negativity and with Priska's relentless positivity (is that even a word?) but I also liked the contrast.  I also know I am a realist and in Thomas's situation, I would feel just like he does.  Whitney brings in all kinds of questions regarding identity.  Thomas is a Mischling but raised in a secular home.  It is on the MS St. Francis, fleeing a country that sees him only as Jewish, that he begins to learn and appreciate more and more about Judaism, his father's religion, and coming to terms with the fact that it is a part of his identity, too.

This is a very interesting historical fiction novel and between Whitney's imagination and research she has produced a valuable novel about a little known part of Holocaust history.

This book is recommended for readers age 12+
This book was bought for my personal library.

Be sure to visit Kim Ablon Whitney's website to read about her research and an interview with a survivor of the real ship, the MS St. Louis, upon which this novel was based.

There is also a helpful teacher's guide there, in both html and pdf form and you can read an except of The Other Half of Life here.

Below is a ten-minute talk by Kim Ablon Whitney on The Other Half of Life.


This is book 6 of my Historical Fiction Reading Challenge hosted by Historical Tapestry
Posted by Alex Baugh at 7:12 AM