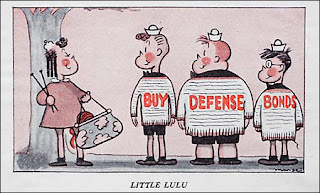 One of the ways that the government financed World War II was by selling war bonds.  Beginning in December 1942, a series of eight war bond drives began, the last one held in December 1945.  Advertising for the sale of war bonds was donated and, when it was all over, more than $156 billion was raised in the 8 bonds drives held, despite the fact that money was so tight for the average citizen.
To encourage already strapped people to buy war bonds, the government employed all kinds of publicity.  Movie stars, radio stars, singing stars and sports stars were all enlisted to help, often appearing at massive rallies or sporting events during bond drives.

Kids were also encouraged to do their bit for the war and to buy bonds at school.  But how do you get kids to part with their hard won nickels and dimes?  One way was by having some of their favorite comic book/scomic strip characters sound the appeal.  And these characters all got into the swing of it, as you can see here:

Even Santa was enlisted to sell war bonds to children: 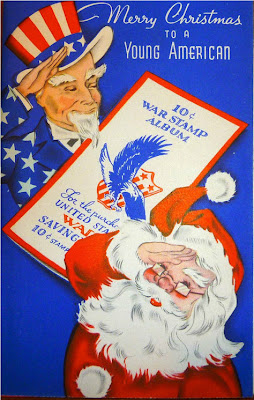 Coming Attractions: Walt Disney and friends.
Posted by Alex Baugh at 8:36 AM