The Girl is Murder by Kathryn Miller Haines 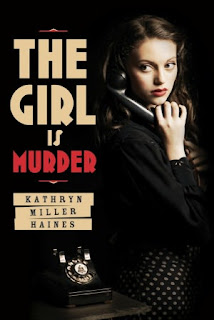 Veteran mystery writer Kathryn Miller Haines has penned her first YA mystery and like her adult mysteries, it is set in New York City during World War II.  And though it is war time, the war seems to play the part of another character.  The story isn’t war related, but the action couldn’t happen if there wasn’t a war happening.
It is the first day at her new school for 15 year old Iris Anderson and she is understandably nervous.  A former student at the post Upper East Side private girls’ school, Chapin, she is about to begin public school on the Lower East Side.
Just before her Pop came home from the war, having lost a leg at Pearl Harbor, her mother had inexplicably committed suicide.  Now, out of money, Iris and her dad have moved into a cheaper place downtown, where he has resumed the detective business.
At school, the first person Iris meets is Suze, a tough girl smoking in the girls‘ room with her friends.  But Iris and Suze actually manage to bond - Suze has a boyfriend in the army and Iris lies about her dad being home.  She also meet Tom Barney, good looking guy who helps her find her class.
At home, Iris overhears a client telling her father he is dissatisfied with proving his wife’s unfaithfulness.  Iris decides to help out, manages to get photos of the cheating wife, but her father gets angry instead of appreciating her efforts.  He wants her to stay out of his business because she doesn’t know or understand how to properly detect.
But when Tom Barney goes missing, and Iris has capitalizes of her bond with Suze to get in good with Tom’s friends, she find she can’t stay out of her father’s business, especially when she learns there is a connection between Tom and her best friend from Chapin, the very well to do Grace Dunwitty.
Kathryn Miller Haines has created a realistic historical fiction novel and a good mystery, though in this first book od a series the mystery falls a little flat.  But that is ok, because the real purpose of this novel is to introduce and familiarize the reader with Iris, her family, her friends, and her environment and Haines has done an excellent job at recreating 1942 New York.
And Iris is an interesting character.  Once a happy, carefree girl who had whatever she wanted, she is now forced to become more ‘street smart‘ with her change of circumstances and, yes, she has taken up lieing to her father.  Haines does a good job of making this change seem plausible.  It doesn’t just happen, Iris makes all kinds of mistakes right from the start because she is impulsive and doesn’t always think things through very well.  But she learns from her mistakes.  Originally, I didn't care much for Iris, but she grew on me and I ended up finding her a very likable character.
I even liked the Rainbows, even though they were supposed to be the school badies - teens who cut classes, went dancing at the Savoy Ballroom in Harlem, and even smoke a lot and drink not so much. The girls dress suggestively. the boys go dancing in Zoot Suits.  Haines includes a disturbing but realistic episode about the Zoot Suits, which were considered very unpatriotic because the large amount of material used to make them should have gone to the war effort.  And there are other realistic touches throughout the book, adding to its appeal.  When I was in high school in NYC, there were groups just like the Rainbows, even that many years later.


The story is fast paced, full of 1940s slang and so New Yorkish, I kept wanting an egg cream while I read it.  Haines brings up and deals with issues around race, class and touches on religion, all very much a part of the time.
This book is recommended for readers age 12 and up.
This book was purchased for my personal library.


This trailer is great:
Posted by Alex Baugh at 6:00 AM