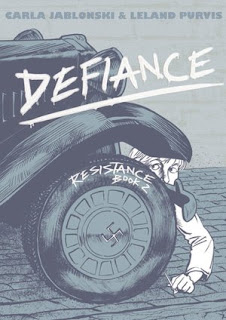 Defiance is the second book in the Resistance trilogy by writer Carla Jablonski and artist Leland Purvis.  It begins in 1943, a year after Book 1 ends.   Tensions are now higher and supplies are lower.  To make matter worse, the Germans have formed a paramilitary group of Frenchmen called the Milice to do their dirty work, as well as instituting a policy of sending young French men and women to labor camps in Germany to help in their war effort. Paul Tessier, his older sister Sylvie and younger sister Marie are still working underground with the French Resistance.
Paul is still posting his anti-Nazi pictures around the village, but now he is also directing his skills towards the Milice.  And he is getting impatient with the resistance movement using propaganda instead of weapons, on orders from Charles DeGaulle in London.
One day, after making a propaganda delivery, Paul finds the house empty, and his mother in their winery cellar demanding more wine to convert into fuel.and pouring heating oil into the ancient casks used to age the wine, and ruining them, infuriating Paul even more.
Paul’s older sister Sylvie is asked by her boyfriend Jacques to cozy up to the Germans to try to get information for the resistance.  But Sylvie storms off because she feels she is being used.  Jacques tells Paul about the Marquis, resistance workers who are hiding out in the woods, and that he wanted Sylvie to find out how much the Germans know about Marquis.
Jacques is sent to Germany for labor service, but when she finds out he escaped and is hiding out with the Marquis, Sylvie changes her mind about helping the resistance by gathering intelligence through flirting.
Paul finally is seen hanging up one of his anti-Nazi posters and realizes he, too, must go into hiding.  But will he be able to find the Marquis and even if he does, will they allow his to become one of them?
Once again the combination of Jablonski, Leland and Sycamore have produced an excellent graphic novel about events effecting the French in World War II.  I have read some criticism of this second book in the Resistance trilogy that it does not stand alone.   Yet, if you read the brief description at the beginning of the story and the Author’s Note at the end, Defiance can easily be read as a stand alone novel, though, of course, it is better if read after reading Book 1, Resistance.
Another criticism is that the artwork depicting the female characters is confusing.  I also thought this when I read Resistance, however, after a few pages I realized there is an each way to tell everyone apart.  Each character wears the same color throughout.  So - Paul wears a blue shirt, little sister Marie wears pink and though Sylvie and Aunt Celia both wear green, they are easy to tell apart.
The only thing that mars this otherwise excellent graphic novel is a lack of explanation about who Marshall Petain and General DeGaulle are and the role they played for France in World War II.  On the other hand, if you are using this as a text in a class, it is definitely a teachable opportunity.  Otherwise, Defiance is a exciting, informative novel based on real events in France while it was under Nazi occupation.
Book 3, Victory, will be available on July 17, 2012 and I am really looking forward to reading it.
This book is recommended for readers age 12 and up
This book was borrowed from the Webster Branch of the NYPL
Defiance
Carla Jablonksi, author
Leland Purvis, illustrator
Hilary Sycamore, colorist
First-Second
2011

Email ThisBlogThis!Share to TwitterShare to FacebookShare to Pinterest
Labels: Family, France, Friendship, YA