My Family for the War by Anne C. Voorhoeve 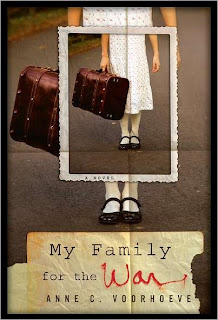 For a short time between December 2,1938 and September 1, 1939, trainloads of Jewish children under the age of 17 were sent from Germany to Great Britain for safety.  Altogether, almost 10,000 children and teens made the trip.  My Family for the War is a novel about how the Kindertransport changed the life of one child.


Frnaziska Mangold,10, thought of herself as a Protestant girl living a comfortable life in Berlin. Her family, originally Jewish, had converted generations ago, and though she considered herself to be Christian, now the Nazis don’t.  Marked as a Jew, life has become precarious for her and her best friend Bekka Liebich.  They have even mapped out as many hiding places as they could find in their Berlin neighborhood, just in case they needed to escape from some Nazi bullies.
When a sponsorship to come to America fell through for the Liebich family, Bekka is registered for the Kindertransport, and at the last minute, so is Ziska.  But only Ziska is chosen.  Just before she leaves for Britain, her mother gives her the cross she had received years ago at her confirmation to remember her by.  Ziska promises never to take it off until they are together again.
It takes a while in Britain before Ziska finally finds a place in a family.  The Shepards, Matthew, Amanda and the teenage son Gary are orthodox Jews, so when Amanda sees Ziska’s cross, she doesn’t really want her to stay with them.  But it is Gary who decides he wants her as a sister, and Anglicizes her name to Frances.
Life eventually settles down for Frances, and becomes even better as she begins to learn English.  But it is not without its troubles, too.  First, Frances has to contend with the guilt she feels about being chosen to go to Britain and leaving Bekka behind.
Later, remembering her promise to try to find a way to get her family sponsored to come to England, Frances starts sneaking off to the Cafe Vienna, a expat hangout for Germans and Austrians.  She never finds help there, but she does meet Professor Schueler, who becomes a good friend to her.  Frances had been told about the Cafe Vienna while crossing the English Channel to Britain by a boy named Walter Glücklich, who, with his father, also becomes good friends.
As the war begins in earnest, and things go from bad to worse, Ziska must struggle to grow up and survive the war at the same time. An the surrogate family she has surrounded herself with as the war intensifies help her do this?
For the most part, I found My Family for the War to be a very interesting novel, though I had a few problems with it.  There is a long bit about Ziska mistaking the Mezuzah hanging on the door frames in the Shepard house for the mailbox, which seemed somewhat forced to me, given that a Mezuzah is only about 2 inches long as a rule.  I was also disturbed by a feeling that Ziska’s real family receded into the background too quickly, and too easily replaced by the Shepards.
On the other hand, this novel is a real coming of age story, showing Ziska/Frances‘ transition from childhood to young adulthood, but it is more than that.  Condemned for being a Jew in Germany, she discovers this part of herself living with the Shepards, proudly learning what being a Jew really is about.
To her credit, however, Voorhoeve has provided the reader with a perspective of the Kindertransport program that is rarely written about for young readers.  Though not everything is easy for Ziska/Frances from the beginning, the point is made that she has a better life with her foster family than many of the other Kindertransport children have, case in point is her friend Walter Glücklich.
This book is recommended for readers age 12 and up.
This book is an ARC received from the publisher
Read an excerpt of My Family for the War here.

More information on the Kindertransport program can be found at the United States Holocaust Memorial Museum
and at The Kindertransport AssociationMy Family for the War (originally Liverpool Street)
Anne C. Voorhoeve
Trans. Tammi Reichel
Dial Books for Young Readers
2012
412 Pages
Posted by Alex Baugh at 6:00 AM