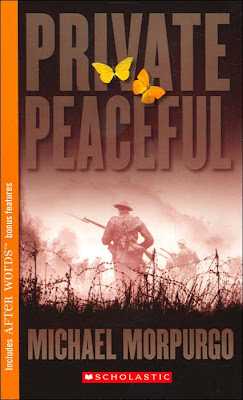 It is the middle of World War I and on the battlefield, Private Thomas ‘Tommo’ Peaceful, 17. is sitting watch, keeping track of the time on an important newly acquired watch, afraid of falling asleep and missing precious moments of this particular night.  As he sits there, Tommo recalls his life, beginning with his family in the village of Iddesleigh and, later, in the trenches of France.
The Peaceful family live in a house on the estate grounds of the Colonel, a mean local squire  Life wasn’t too bad for the Peaceful family until Mr. Peaceful, an estate forester, is killed by a falling tree, which the young Tommo believes is his fault.  After that, Mrs. Peaceful must go to work in the Colonel’s house in order to be allowed to remain in the cottage they are living in.  Great Aunt Wolf moves in to look after the children - older brothers Charlie and Big Joe, who is disabled, and Tommo.  She is a mean spirited woman runs the house with an iron hand and takes every opportunity to belittle the boys.
Things aren’t much better in school.  Mr. Munnings, one of two teachers, has it out for Charlie, and starts in on Tommo his first day of school.  Big Joe doesn’t go to school but wanders singing Oranges and Lemons, a children’s nursery song, everywhere he goes.  At school, Tommo meets Molly and it is love at first sight for him.
Soon Charlie, Tommo and Molly are inseparable friends, doing everything together, including poaching fish and game from the estate grounds.  Throughout everything, having fun or getting into trouble, Charlie has been there for Tommo, so when he realizes that Charlie and Molly are secretly meeting without him, he feels betrayed, but keeps it to himself.
Charlie and Molly’s relationship leads to pregnancy and when Molly is sent packing by her parents, she and Charlie are married.  When the war in France intensifies, the Colonel decides if the Peacefuls are to remain in their cottage, Charlie must enlist.  After Tommo, who is too young to enlist, is called a coward by an old woman caught up in the war’s jingoism, he also decides to enlist and the brothers manage to pass themselves off as twins for the recruiter.
During basic training, they serve under the cruel, sadistic Sergeant “Horrible” Hanley who has it out for both the Peaceful boys from the beginning.  And it is because of Hanley’s viciousness that Tommo is keeping this particular watch.
Generally, when I read books that are a person’s recollections of their life, I feel at though I am being told their story and the storyteller is conscious that they are addressing someone.  With Private Peaceful, I felt as though I (as a reader) were simply privy to Tommo’s private memories.  He wanted to be alone for the night and consciousness that I was there as a listener would have defeated his need to be alone.
Private Peaceful is a well written novel, but there are some graphic descriptions of trench warfare.  It is written in the plain, straightforward language of a young country boy at that time, such there is a real eloquence to it.
There are two important issues at the center of Private Peaceful.  The first issue Morpurgo brings to light is that sometimes the enemy is not the fellow facing you across the battlefield in waiting in his trench, but is right there, side by side with you.
The other issue in Private Peaceful is a moral issue that inspired Morpurgo in the first place.  When the Peaceful brothers are finally sent to the front, they find themselves at Ypres, Belgium.  For anyone who has ever seen the gravestone in Flanders Field, you what a particularly horrendous field of carnage it was.  But among the thousands who were shot on the battlefield, are almost 300 graves of soldiers who were shot for cowardice.  These men were give a fast trial, without representation and the without regard to the effects of war on their minds as well as their bodies.  Some of them were still just kids, like Charlie and Tommo.  And, Morpurgo writes in his Postscript, that although most countries have give pardons to there soldiers, Britain has not.
Private Peaceful is a must read for anyone interested in war literature or in humanity in general.
The Telegraph has an excellent article from 2003 about Morpurgo and Private Peaceful that you can read here.  http://www.telegraph.co.uk/education/4793519/Anthem-for-doomed-youth.html
This book is recommended for readers age 12 and up.
This book was borrowed from the Fordham branch of the NYPL

Email ThisBlogThis!Share to TwitterShare to FacebookShare to Pinterest
Labels: Family, France, Friendship, World War I, YA