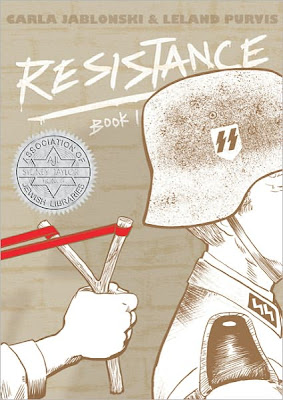 Resistance is the first graphic novel in a trilogy about young resistance workers in southern France during the Nazi occupation of their country.  These graphic novels for young adults are a collaboration of Carla Jablonski, noted children’s author, and Leland Purvis, artist and writer of comic books.
At the beginning of the story, Jablonski has included an explanation about how France was divided between the occupied northern half and the so-called free southern half after it signed an armistice with Germany to stop the fighting in 1940  Now, it is 1942, and  up this point, life wasn’t too terrible for those who are living in southern France, certainly better than those who living in the occupies areas.
Paul Tessier may live in the “free” part of occupied France, but his father is German prisoner of war and no one knows anything about him.  And now, the Nazis everywhere, more brazen than even, always threatening the daily life of the French and helping themselves to whatever they want. .  Angered by all this, Paul is no longer content to simply post his anti-Nazi posters about town.
Besides owning their own vineyard, Paul’s family has taken over the hotel owned by their friends, the Levy’s, who can no longer own it because they are Jews.  But when the Nazis requisition the hotel for their own use, the Levy’s disappear.  Afraid for them after hearing about the round ups and deportations of Jews in Paris, Paul worries about what will happen to the Levy’s, especially his best friend Henri Levy.  But he finds Henri in the woods, hanging out by a pond, completely unaware of what has been happening to the Jews in town.
Paul and his younger sister Marie decide to hide Henri in one of the wine cellars at the Tessler’s vineyard.  One night, Paul catches his older sister’s friend, Jacques, trying to get into the vineyard and discovers that Jacques is part of the Resistance.  Paul and Marie both want to join it, too and after passing a test, they are given an assignment - get Henri to Paris and safety using false identity papers.
The plan goes well, but when the three of them arrive in Paris, Henri is in for a big surprise waiting for him.
This was a very well done graphic novel.  The textual part of the story is succinct and yet completely comprehensible, one of the amazing feats of good graphic novels. In an interview, Jablonski said that she used her experience as a playwright to get dialogue and gesture to convey the story.  As a playwright, she said, one must think visually and graphic novels rely so much on the visual to make the story come together.
And that also means that just the right images have to be incorporated into the story.  And Purvis has done a brilliant job at rendering Jablonski’s novel, so that dialogue, gesture and image are wholly in sync.  His lines are hard and sometimes severe reflecting the the stress and tension of living in such an oppressive situation.  Purvis also differentiates his images from Paul’s, an artist in his own right, providing two perspectives of the action - Purvis’s show what is going on around Paul, while Paul’s drawings often reflect what he is thinking/feeling.
But it was the cover of Resistance that first caught my eye - an effective up to date rendering of the biblical David and Goliath story - it says so much about Paul’s story in particular and the resistance movement in general.

The idea of young kids being part of a dangerous movement like the resistance may seem difficult to accept, but, in fact, there were many young people involved in these underground activities in all the occupied countries.  But young kids can get away with things that adults could never pull off and Jablonski makes their willingness and usefulness very clear in this first graphic novel of the trilogy.

On the other hand, in her Author’s Note, Jablonski writes that resistance workers were brave, but they were not saints and she has remarkably captured  the range of their feelings - the fear, the anger, the frustration, the sense of oppression and even the bickering among themselves, giving the whole thing are great touch of reality.
This book is recommended for readers age 12 and up.
This book was purchased for my personal library.
Resistance was a 2011 Sydney Taylor Honor Winner
Resistance was named a 2011 YALSA Great Graphic Novel
Resistance, Book I
Carla Jablonski, writer
Leland Purvis, artist
Hilary Sycamore, colorist
First-Second
2010
128 Pages
Posted by Alex Baugh at 7:27 AM