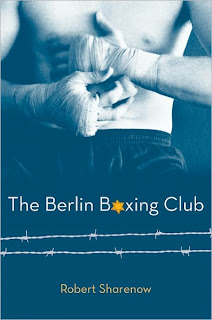 The Berlin Boxing Club is an historical fiction novel about a young secular Jewish teen coming of age in Nazi Germany between 1934 and 1939.  Karl Stern has never considered himself a Jew and his Aryan looks have always helped him get away with that.  But not anymore.
After receiving a vicious beating by some former friends turned Hitler Youth bullies, Karl has the good fortune to meet boxing champion Max Schmeling, who knows immediately that he had been beaten up.  He offers to give Karl boxing lessons at his club in exchange for a Georg Grosz portrait of himself which Karl’s art dealer father owns.  Though the Stern’s desperately need money not boxing lessons, Karl’s father reluctantly agrees to the deal.
While Karl becomes more and more proficient at boxing, life at home becomes more and more difficult.  His father is always angry and critical of Karl, his younger sister is unhappy and afraid and his mother is severely depressed and distant.  To make matters worse, he has started a relationship with an Aryan girl in his apartment building, something expressly forbidden in Nazi Germany.
And things just get worse.  His father’s art gallery is forced to close, and the family must live on the little money earned from his private printing business, which includes making flyers for parties given by a drag queen named The Countess.  Eventually, the Sterns are evicted from their apartment for being Jews and forced to live in the closed art galley.
Karl’s one saving grace is boxing, but when he is outed at a German Youth Tournament in 1937 and barred from competing, he not longer can use boxing as an escape, and stops going to The Berlin Boxing Club.  When he finally does return, he discovers that the club has been sold and turned into place where blankets are made. 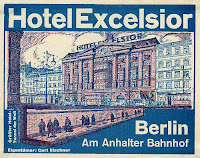 Meanwhile, Max is in the US, preparing for a rematch with Joe Lewis, the famous African American boxer he had previously defeated in 1936 much to the joy of the Reich.  But when Max loses the rematch, he also loses all his standing and creditability with the upper echelons of the Nazi regime.  He returns to Germany, defeated and degraded, living in the Excelsior Hotel.
And this is where Karl finds him after the gallery had been destroyed during Kristallnacht by roving Hitler Youth members and his father’s subsequent arrest for owning a forbidden printing press.  Now, Karl really needs help from Max.
Sharenow effectively demonstrates the effects of the increasingly tightening noose that the Nazis put about the Jews in Germany in the 1930s in The Berlin Boxing Club.  I thought the characters were well drawn, both realistic and sympathetic.  Through them,  Sharenow was able to show how strongly many secular Jews had considered themselves to be German first, Jewish second and why that thinking may have caused  a great deal of confusion when the Nazis first took over.  This is really apparent in Karl, who even wishes he could join the Hitler Youth along with the other boys in school, a not uncommon wish of may Jewish boys and girls in the early days.  Like many people, the Sterns thought that Hitler and his regime wouldn’t last or that things would at least calm down.  I certainly would have felt the same way at that time.
Extra kudos to Sharenow for adding a drag queen character, no doubt a remnant of the old Weimar Republic days, and I thought the subsequent courageous part s/he ultimately played in Karl’s life very touching.
Unfortunately, there were two things that diminished this book for me.  I felt overwhelmed by boxing descriptions and found myself glossing over them.  I do think boxing is a nice metaphor for this coming of age story.  The reader sees Karl’s going from a undisciplined fighter to well-trained boxer just as he learns to overcome his youthful impetuousness on his way to becoming a more thoughtful man.
My other problem was the language.  It was just too modern.  People in the 1930s simply did not use many of the clichés used in today’s world - such as “at the end of the day.”  I felt these clichés happened too often and it took away some of the authenticity of the novel
One this of note: Sharenow writes that he was inspired to write The Berlin Boxing Club by the true story of Max Schmeling helping to save the lives of two Jewish boys by hiding them in his hotel room until he could secure passage for them to escape to the US.  This act of kindness and heroism had remained unknown until 1989, when one of the boys, Werner Lewin, invited Schmeling to the US to thank him.
Robert Sharenow was awarded the 2012 Sydney Taylor Book Award in the Teen Reader Category.
This book is recommended for readers age 13 and up
This book was borrowed from 67th Street Branch of the NYPL
Be sure to visit Robert Sharenow’s website for a wonderful Discussion Guide on The Berlin Boxing Club
**Lots of wonderful German Expressionist artists, besides Georg Grosz, are mentioned in this book, and in his list of Sources, Sharenow mentions the Neue Galerie as a great place to see the works of some of these artists, so do visit if you are ever in NYC, and try the wonderful old world brunch at the Cafe Sabarsky, one of my favorite things to do on Friday morning.