"I believe that anyone who lived through an experience is duty bound to bear witness to it." — From Elie Wiesel: First Person Singular 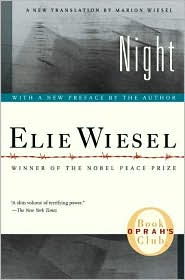 In Night, Elie Wiesel bears witness to his experience of the Holocaust. Living what they thought was a safe existence in Sighet, Romania (Transylvania), the Wiesel family, like all the Orthodox Jewish families there, could not believe the reports of mass murder that came back to them from an eyewitness who had managed to escape the Nazis.

Then the spring of 1944 arrived in Sighet, and so did the German soldiers, billeting themselves among the residents there. At first, these Nazis were polite and considerate, and people still weren’t worried because radio reports said that the Russian Army was pushing westward, in their direction.

But, on the Seventh Night of Passover that year, everything changed. Jews were ordered to remain in their homes for three days, valuable were to be handed over and a yellow star was to be worn. Two ghettos were created, a small one where people stayed temporarily before being transported to camps, and a large one for longer stays. With each egregious act, the Jews of Sighet convinced themselves that it couldn’t get worse, but it did. The Wiesel family was among the last in Sighet to be transported to Auschwitz-Birkenau when the ghetto was finally liquidated.

They were put into cattle cars with 80 people in each and slowly traveled for days until they finally reached Auschwitz in Poland. There, during the selection process, Elie and his father were separated from his mother and youngest sister, Tzipora. He never saw them again. Elie and his father remained in Auschwitz for three weeks, before being sent to Buna, also called Auschwitz III. There, the inmates were put to work, most of them doing factory work for the German war effort.

Elie and his father remained there until January 1945, when all the inmates were forced on a death walk to a concentration camp in Germany, as the Red Army was only hours away from Buno. Elie ended up in Buchenwald Concentration Camp until April 11, 1945 when the camp was liberated.

Night is a book that answers Theodore Adorno’s question – how do you make poetry (art) after Auschwitz? In other words, how do you describe the indescribable?

Elie Wiesel did this in simply declarative sentences, using straightforward vocabulary.  And yet, he produces a picture of horrors that are almost impossible to imagine. For this reason, I think it is a benchmark for Holocaust memoir, along with Anne Frank’s The Diary of a Young Girl and Primo Levi’s If This is a Man.

I have always thought the title of the book, Night, came from this passage:
Never shall I forget that night, the first night in camp, which has turned my life into one long night, seven times curses and seven times sealed. (pg 34)

And it does, but it also refers to a biblical passage - Genesis 1:5 defining a day as starting at nightfall (which is why Jewish holidays always start at sundown):

"God called the light Day, and the darkness he called Night. And there was evening and there was morning, one day."

In this respect, even though the book describes the inhuman treatment of Jews by Nazis, Night also carries the message of hope in its title - there will always be a tomorrow.

I had read Night when I was in high school, but when Oprah Winfrey picked it for her Book Club Selection in January 2006, I reread this new and better translation, which, incidently, was done by Marion Wiesel, Mr. Wiesel’s wife. Thanks to Oprah, Night was read by 2,021,000 readers, many of whom might never have read it otherwise, according to a report in the Huffington Post It was the 3rd most popular book throughout her book club history.

Interestingly enough, although Elie Wiesel was awarded the Nobel Peace Prize in 1986, to date, Night has never been given any individual honors.

This book is recommended for readers age 14 and up.
This book was purchased for my personal library

The following websites may be of interest to readers of Night:
Elie Wiesel: First Person Singular
The Story of Night

And you might want to visit The Elie Wiesel Foundation for Humanity  This foundation lost most of their assets,  $15.2 million,  thanks to Bernie Madoff, but they continue on in the same determined spirit that helped Elie Wiesel survive the Holocaust and they carry on with their youth focused programs promoting "acceptance, understanding and equality.

This is book 2 of my European Reading Challenge hosted by Rose City Reader
Posted by Alex Baugh at 9:07 AM