Starring Sally J. Freedman as Herself by Judy Blume 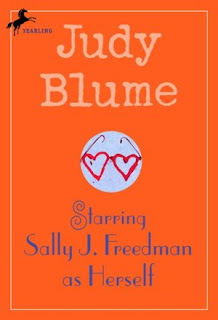 This is an early Judy Blume book about a 10 year old girl living in post war .  In it, Blume portrays misconceptions that can happen when kids don’t fully understand complicated events and how they fill in what they don’t know with their own ideas.
Sally Jane Freedman likes her life in .  She has friends, including a best friend, and her family, mom, dad, older brother Douglas and maternal grandmother, Ma Fanny, all live in relative peace and harmony in a nice comfortable four bedroom home.  Sally has a vivid imagination and is always making up heroic scenarios in which she plays the starring role.  These range from spy missions to to capture the maybe-not-really- dead Hitler, because he is responsible for the deaths of her grandmother’s sister, Tante Rose, and Rose’s daughter, Lila in the Holocaust, to being chosen to be Esther William’s younger sister in a movie.
But Sally’s life is disrupted when her brother comes down with nephritis.  When he is well enough, everyone except Sally’s dad temporarily move to for ’s continued recovery.  As much as she didn’t like moving, Sally soon adjusts to the new school and makes new friends.
Two things spoil life in for Sally.  The first is her worry about her father back in .  Her mother, a perpetual worrier and germ phobe, has been depressed about the fact that her 42 year old husband’s brothers both died at that age.  Once again, Sally had picked up bits and pieces of conversations and has filled in the blanks, causing her to also worry about her dad.  She continuously writes him letters to assuage her fear.
The second thing is Sally’s belief that her elderly neighbor, Mr. Zavodsky, is really a disguised Adolf Hitler hiding out in .  She continuously writes letters to him to let him know she is on to his real identity.  These also assuage her fears, but Sally never mails them, putting them in her keepsake box instead.  But Mr. Zavodsky does unknowingly play a big part in helping Sally come to terms with the war and the Holocaust, both of which she still thinks about frequently.
For the most part, Starring Sally J. Freedman as Herself is an interesting portrayal of the little everyday things in life, which is why Sally resorts to her imagination to spice things up a little.  The book is a wonderful window through which today’s readers can look at what life was life for a kid in the mid-1940s.  After all, how many of them are familiar with Murphy beds, Margaret O’Brien, Admiral Halsey, a game called Jolly Roger, party line telephones and my personal favorite Potsie (hopscotch to those who live outside of NYC.)   I think that for today’s reader, however, the book could use a glossary or something to help understand these things.  For example, I never heard of a game called Jolly Roger growing up.
I was very resistant to reading Sally J. Freedman for unknown reasons.  And after I began it, I dragged my feet reading it.  Then suddenly, I couldn’t put it down.  Odd that.  At first, I found it written a little too simply, but soon realized it was just a 10 year old narrative voice, which then seemed perfect.  And Blume maintained Sally’s narrative voice so smoothly, letting the reader see exactly how Sally filled in the blanks to try to understand the world and what was going on around her.  And, without resorting to stereotypes, I thought that the characters and situations were very believable.  I grew up knowing a lot of my friend’s Yiddishe grandmothers and I really thought Blume’s portrayal of Ma Fanny was just spot on.
Judy Blume has said that this is her most autobiographical book.  Many of Sally’s experiences were culled from her own life, including the big part that the war played in her childhood.  And that is precisely what makes it a great story.  Starring Sally J. Freedman as Herself is a story that catches a girl as she begins to come of age and it follows how and how much she grows up during one important year of that process.  It is a delightful story and I highly recommend it.
This book is recommended for readers age 8-12
This book was purchased for my personal library
Starring Sally J. Freedman as Herself
Judy Blume
Yearling/Random House Imprint
1977/1991
268 Pages
Posted by Alex Baugh at 9:22 AM