From the Archives # 14: The Oppermanns by Lion Feuchtwanger 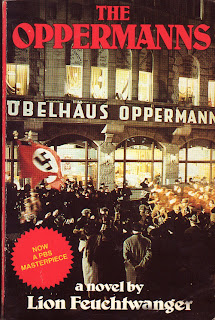 I am pleased to say, that The Oppermanns by Lion Feuchtwanger is my premiere Crossover entry.  It is a compelling, poignant novel written in late 1933 about a prosperous Jewish family’s first year living in Berlin under Nazi rule. The family consists of three brothers and one sister: Gustav, Martin, Edgar and Klara, and with the exception of unmarried Gustav, their spouses and children. They had inherited the three generations old family business of making inexpensive furniture and they have always thought of themselves as intelligent, educated Germans.

The novel begins on November 16, 1932. It is Gustav Oppermanns 50th birthday but he wakes up with a very vague uneasy feeling. Since he is a totally non-political man and hasn't paid very close attention to what is happening in Germany, he cannot identify the cause of his unease. Following some self-examination, he realizes that he has actually become indifferent. Disturbed by this insight, he writes out a postcard to send to himself, moving words from the Talmud that in the end will be an important driving force in Gustav’s life:

Take note of this for all your life:
It is upon us to begin the work,
It is not upon us to complete it.

The Nazis have been gaining ground and things are beginning to change in Germany because of it. For the first time in its history, the Oppermann’s furniture business is forced to take on an approved Aryan partner in order to keep it running. This is a move that contributes to their eventually losing it altogether. Not long after that, Edgar, a prominent surgeon known for a very successful cure he developed called the Oppermann Treatment, is forced out of his clinic, falsely accused of mistreating his Aryan patients. But saddest of all is the story of Berthold, the 17 year old son of Martin and his non-Jewish wife, Liselotte. Berthold finds himself faced with an increasingly hostile Nazi teacher and his student followers when he refuses to “aryanize” a history report. Young and idealistic, Berthold is eventually driven to suicide.

Ultimately, the family is forced to flee Germany and Gustav goes into exile in Switzerland. He, like Feuchtwanger, had never taken Hitler seriously in the beginning. After all, how could this silly little man with the funny mustache, who couldn’t even write a good German sentence in Mein Kampf, rule a country like Germany? But after Berthold’s suicide, his eyes are opened and he begins to read everything he can about events in Germany. Gustav eventually makes the decision to return to Germany under a false identity and see for himself just what is happening and to records these things.

As he travels around Germany, he collects all kinds of examples of Nazi abuses, but one day he is caught, arrested and sent to a concentration camp.

What makes The Oppermanns so interesting is that it has the distinction of being the first story of its kind to tell about life under the Nazis and how it affected people opposed to Hitler. Feuchtwanger had based this story on reports he heard from people who had fled Germany for what they thought would be the safety of France and it is probably one of Feuchtwanger's better novels, at least in my opinion. Feuchtwanger had himself taken refuge in Paris when Hitler became chancellor of Germany and friends warned him not to return home – the Nazis had already been searched his home and he was on the list of banned books that were subsequently burned. Feuchtwanger remained in France until 1940 when he was arrested and placed in an internment camp for future deportation to a concentration camp and certain death. He is one of the artists that were rescued by Varian Fry (see my review In Defiance of Hitler: the Secret Mission of Varian Fry by Carla Killough McClafferty.)

The Oppermanns is a straight forward story that, when reading it with hindsight, contains a great deal of prescience, almost prophetically so. As a work of historical fiction, it is a good book for YA readers because it is not a complicated or terribly sophisticated work, requiring a great deal of background knowledge to make it understandable. This accessibility would have a great deal of appeal to a high school age reader interested in history, or those who simply like historical novels. When The Oppermanns was first published in the United States, it was extraordinarily popular, spending a good number of weeks on the NYTimes Bestseller List.  However, in the American version the ending was changed from the original German, which is unfortunate since I think the ending Feuchtwanger wrote made The Oppermanns a more powerful book. Nevertheless, it is still a very worthwhile book to read.

This book is recommended for readers’ ages 14 to adult
This book was purchased for my personal library.

This is book number 1 of my German Literature Month Challenge hosted by Lizzy’s Literary Life and Beauty is a Sleeping Cat
Posted by Alex Baugh at 9:16 AM

Email ThisBlogThis!Share to TwitterShare to FacebookShare to Pinterest
Labels: Family, From the Archives, Germany, Pre-WWII, YA/Adult