So Far From the Bamboo Grove by Yoko Kawashima Watkins 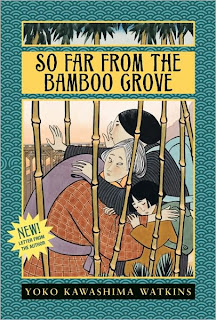 So Far From the Bamboo Grove tells the story of an 11 year old Japanese girl, Yoko Kawashima, who had lived in Nanam in North Korea all her life; in fact, she had never even seen her homeland Japan.

But now, towards the end of the war, Yoko, her mother and older sister Ko are warned by a friend, Corporal Matsumura, that things are not going well and they must try to return to Japan immediately. With Mr. Kawashima, a Japanese diplomat, away in Manchuria, China, and their 18 year old brother Hideyo working elsewhere, Yoko, Ko and their mother leave their home in the middle of the night, taking only what they could carrying. The corporal had been able to secure them places on a hospital train bound for Seoul, where they hoped to find passage on a ship to Japan.

Hideyo had wanted to join the Japanese army when he learned that the war was no longer going well for them. But he is rejected by the army and placed in a factory in another part of Korea to make munitions for the Japanese army. When the war ends, he also finds it necessary to flee and the book is split between the difficulties he meets on his journey with that of the Kawashima women.

The women are able to board the train to Seoul using a letter from Corporal Matsumura, but when the train is bombed 45 miles away from that city, they are forced to walk the rest of the way.  Not long after they start walking, the women are stopped by three armed Korean Communist Army soldiers. But when planes fly over and bomb the area they are in, the soldiers are killed. The women take their uniforms, and because they speak fluent Korean, pass themselves off as Koreans for much of their journey. However, the bombs left Yoko with a painfully injured chest.

Eventually, the women make it to Seoul, where Yoko was fortunate enough to have her chest taken care of at the makeshift Japanese hospital. Ko minds their place in a train station, and must constantly scrounge around for food, while Yoko and her mother remain at the hospital. When Yoko is able to travel, once again manage to get places on a train, this time to Pusan, where they must await passage on a ship to Japan. But when Yoko arrives in Japan, it is not the beautiful, comforting, welcoming place she had always dreamt it would be. Japan is now a defeated country, reeling from the two atomic bombs that had been dropped on Hiroshima and Nagasaki. There is little food and great destruction, and no welcome for the new influx of refugees returning home. Once again, they find themselves living in a train station and scrounging in the garbage of others for food to survive.

So Far from the Bamboo Grove is a compelling, well-written story, detailing how the Kawashima women survive by their wits and much luck. It is a coming of age story, in which Yoko goes from a whining, complaining 11 year old to stronger, and more mature 12 year old girl.

Unfortunately, it is a story not without some controversy. While most people like the book, it has created quite a bit of resentment among Koreans and Korean Americans, who feel that the atrocities committed in Korea during the Japanese occupation was basically ignored and that some of the facts in the book are distorted. Koreans were portrayed as rather barbaric, and there is even the intimation of a Japanese woman being raped by a Korean man. Because of this, in 2006, the book was removed from the reading list for 6th graders at the Dover-Sherborn Middle School in Massachusetts, but was later out back on it. The school decided to find other books that would give the story of Japan occupation in Korea some balance. Which reminded me of When My Name was Keoko. Both books are based on the true experiences of young girls who lived through the war in Korea. Their stories are very different, but read in tandem, the two books do offer a more balanced historical context on this controversial time and that is how I would recommend reading them.

An extensive study guide for So Far from the Bamboo Grove is available at The Glencoe Literature Library.
A concept analysis guide is available from novelinks.org

Ironically, Yoko Kawashima Watkins received The Courage of Conscience Award from the Peace Abby in Sherborn, Massachusetts, despite the controversy surrounding her story.

So Far From the Bamboo Grove
Yoko Kawashima Watkins
HarperCollins
1994
192 Pages
Posted by Alex Baugh at 7:50 AM