The Orphans of Normandy, a true story of World War II told through drawings by children by Nancy Amis 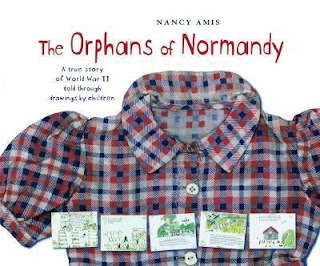 La Maison du Clos in St Andre sur Orne in France was both a home and school to 100 orphaned girls aged 3 to 19.  However, just as the invasion of Normandy by Allied forces was beginning, on June 5-6, 1944, the girls were forced to leave their school in the middle of the night for their own safety. Accompanied by their teachers, the girls, some with no shoes, left with nothing more than the little plaid dress they were all wearing and each carrying a blanket, some bread and a little white flag.

The story of their school and journey is told through the drawing of some of the girls. One page has the drawing, with the name and age of the girl, and a brief description of what the drawing represents written by her; the page opposite that is the English translation.

At first, the girls and their teachers were able to hide from the bombing in an iron mine, but the Germans soon found them and on July 14, forced them to leave. The school took to the road, along with other refugees who also had no place else to go, despite the bombing and machine-gunning going on all around them. The story continues, each drawing dated by the girl who did it, and relating where they were and what they witnessed along the road. Whenever a plane spotted them, usually an Allied plane, and started to descend for an attack, the girls would wave their little white flags and be left alone. Sometimes, the school managed to get a ride in carts, and they were often allowed to sleep in haystacks or haylofts along the way, sometimes they were even given milk to drink by kind farmers.

Altogether, the school spent 38 days in the old mine before being forced to evacuate, followed by 29 days of walking until they were finally safe behind the Allied line

I wish I had this picture in color but this will have to suffice to give you an idea of the drawings. 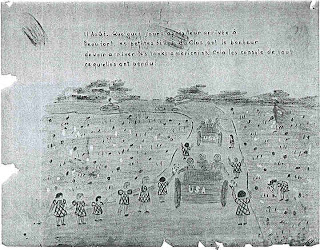 Translation: August 11. A few days after their arrival at Beaufort, the little girls of the Clos were happy to see American tanks. That consoled them for all that they had lost”

Eventually the school settled in an old chateau just north of Paris, but they were pretty destitute. In her Afterword, Nancy Amis explains that her aunt, a French teacher named Agnes Amis was friends with the school’s directress, Yvonne Lesure. In 1946, Agnes Amis received a package from Mme. Lesure containing an explanation of the school's situation, a child’s dress and the illustrated journal of the journey the school had undertaken because of the invasion. It was the beginning of an exchange of letters and care packages to help the school get on it feet again and re-establish itself.

This is one of those amazing stories of survival that came out of the war – a tribute to the human spirit. It is especially poignant because it was written and illustrated by the girls themselves. I thought this book would be perfect for teaching since it could be used in language classes as well as social studies classes, but with the exception of this 9th grade lesson plan, Teacher,  from The University of North Carolina, Charlotte, I found nothing.
Nevertheless, I would highly recommend this book.