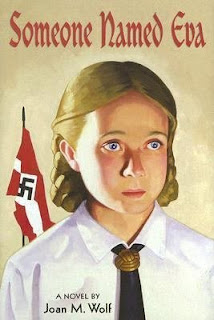 Joan Wolf has written novel based on truth. The first part of Someone Named Eva is based on the famous massacre of the residents of Lidice, Czechoslovakia. The second part is based on a little known practice of the Nazis in which children who looked Aryan were forcibly taken from their families, placed in a Kinderheim (children’s home) and Germanized. After their Germanization was completed, they were adopted by German families.

The novel begins in the middle of the night on June 10, 1942, a few weeks after Milada Kralicek’s 11th birthday. There is a knock on the Kralicek’s front door and armed Nazis order the family to pack a few things and go with them. In the yard, Milada, her mother, grandmother and baby sister are separated from her father and older brother. Before they leave the yard, Milada’s grandmother surreptitiously gives her a star shaped garnet pin and tells her she must always keep it to remember who she is. The stars had always held special meaning for them; growing up, her grandmother had taught Milada all about the constellations and how the North Star can always help you find you way home.

On the road, they are joined by the other women and children of Lidice. These are all people who had believed that they were safe from the Nazis because they were not Jewish, but Hitler was enraged about the assassination of Reinhard Heydrich* in Prague by two Czechs. He gave an order that all adult men over 16 were to be executed, all women were to be sent to a work camp, the village of Lidice was to be burned to the ground and all children suitable for Germanization were to be removed. Wolf does not go into all the grime details of this terrible event, but the reader does slowly learn something about it as the story goes along.

From Lidice, the women and children are driven to Kladmo, where they are held in a large gymnasium. The floor is covered with hay and each family quickly claims a space for themselves on the floor. On the second day, two men go through the gym, looking over the children and picking a few to go with them, including Milada. These children have one thing in common - blond hair and blue eyes. They are lined up and examined, including measurements of their noses and heads. Even the color of their eyes is compared to an eye color chart. Late on the third day, Milada is taken away from her mother, who is later sent to Ravensbrück Concentration Camp. Milada and one other girl are put on a bus by themselves. In reality, it is estimated that around 100,000 children were stolen from their families for Germanization just as Milada is.

The girls are taken to Puschkau, Poland, a village surrounded by barbed wire. It is filled with Nazi women and girls who look just like Milada – blond hair, blue eyes. She is at a Lebensborn center, where she is about to be Germanized. Here, Milada ceases to exist as she is turned into Eva, an Aryan girl.

Milada/Eva spends two years at the center in Puschkau being Germanized, better known as brainwashing – learning how to speak German and how to be a proper Nazi wife and mother. There are no shortages here, none of the hunger she had felt at home, and there are always new warm clothes and shoes whenever they are needed. Though she tries hard to hang on to her original identity, Milada begins to slip away and Eva takes over.

After two years, Eva is adopted by a German family, and her new father is the commandant of Ravensbrück. At first, life is good there, with the exception of the terrible smell that permeates the air, and she begins to forget her past life in Czechoslovakia. One day, she wraps her grandmother’s star shaped pin in a handkerchief, puts it away in a draw and forgets about it. Then one scary day, Eva realizes she can no longer remember what her real name was. But by now, it is 1945 and Germany’s fortunes have started their downward turn. Eva is about to experience yet another major upheaval in her young life.

Someone named Eva is narrated in the first person by Milada, enabling Wolf to take two otherwise complicated and horrific subjects and present them in a very simple straightforward way, ideal for younger readers. There is also a long Author’s Note at the end of the book explaining the events that took place in Lidice and afterwards. Lebensborn centers were not originally intended for Germanization and indoctrination, but for reproducing racially correct babies. Nevertheless, during the war they took on this second task. I highly recommend Someone named Eva.

This book is recommended for readers aged 9-12.
This book was borrowed from the Yorkville Branch of the New York Public Library.

*Reinhard Heydrich, nicknamed “the Hangman” was a particularly hateful, cruel man and one of the architects of the Final Solution. He was named Reich Protector of Bohemia-Moravia in 1941. His job in Czechoslovakia was to organize and coordinate the deportation of Jews and other enemies of the state to death camps.
Posted by Alex Baugh at 12:07 PM