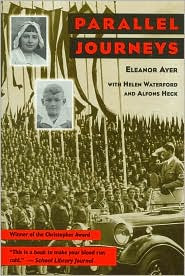 The early lives of Alfons Heck and Helen Katz and their individual experience of Hitler’s sway are the subject of this book. Alfons was born in1928, in Wittlich, Germany, a town near the French border and in the heart of the Mosel wine country. He was still a young boy when Hitler came to power and knew no other way of life than Nazism. By the time he was old enough to join the Hitler Youth at age 10, he had been fully indoctrinated in and completely accepted Nazi dogma. Helen was older, born in 1909 in Frankfurt, Germany. In 1933, she married Siegfried Wohlfarth. When the first new laws were passed discriminating against Jews, Siegfried lost his job and Helen was forced to leave university.


By 1935, things were considerably worse for Jews in Germany. Helen and Siegfried decided to leave and went to live in Amsterdam, Holland. In 1937, their daughter Doris was born. Less than a year later, Alfons was sworn into the Jungvolk , the junior branch of the Hitler Youth. After Kristallnacht, or the night of the broken glass on November 9, 1939, Helen and Siegfried were able to get Helen’s brother Fred to England and later the US, and their parents to Holland. But other Jews were not so fortunate.

When the Nazis invaded Holland in 1940, the Wohlfarths knew their safety would be in jeopardy from then on and they realized that they would have to do something. In July, 1942, they received a letter telling them to report at the train station for “resettlement to the East.” They bought themselves a little more time in Holland by having a doctor remove Siegfried’s healthy appendix. Through the Dutch Resistance, they were able to find a Christian family who was willing to take in Doris and protect her from the Nazis. With Doris safe, Siegfried and Helen decided to go into hiding, again with help of the Dutch resistance. Meanwhile, Alfons had been accepted into the elite Flieger Hitler-Jugend, where he would start training first in glider flying and later as a Luftwaffe pilot. Alfons loved flying and became youngest top-rated glider pilot in all Germany.

Eventually the Wohlfarth’s were discovered in their hiding place. On September 3, 1944 they were put on a train and sent to Auschwitz. Their arrival at this camp was the last time Helen saw Siegfried. It wasn’t until many years later that his death on December 5, 1944 in Stutthof concentration camp was confirmed for her. Helen stayed in Auschwitz for two months and was relocated to Kratzau, a work camp in Poland. She remained there until the Russian Army liberated the camp. She decided to go find her daughter, despite being sick and weak, and, wearing a pair of men’s dress shoes she had been given by the Red Cross, she started walking across Europe to Amsterdam. By the end of the war, Alfrons never made it to the Luftwaffe, but he did achieve the highest rank possible in the Hitler Youth.

Alfons and Helen both ended up living in California, and after reading an article Alfons had written in a newspaper, Helen got in touch with him. In 1979, they formed a partnership, speaking to groups of people about Nazi Germany and the Holocaust. Their only criterion for their collaboration was complete honesty. I can only imagine how much courage it must have taken for these two people to stand in front of audiences and tell their stories.

In 1985, Alfons Heck published a book about his life called A Child of Hitler: Germany in the Days When God Wore a Swastika. In 1987, Helen, whose real name was Herta Katz, published a book about her life called Commitment to the Dead: One Woman’s Journey toward Understanding. These books are not for young readers. However, using excerpts from each of them to trace the parallel, but very different journeys of Helen and Alfons, Ayer has produced a very informative and engrossing book for a younger reader. She has filled in their personal stories, which are compelling on their own, with historical details. The book is intense, but never overwhelming. It is clear both Helen and Alfons continued to bear the scars of their youth under Hitler’s domination, although they both tried very hard to come to terms with their separate pasts. But can one ever come to terms with this period in history? I did find that sometimes, when reading the sections on Alfons, I had to remind myself that he was still a child turned into a boy soldier, along with so many others, by the end of the war. And even after Nazi Germany fell, he was not yet a man, just a 16 year old boy who wanted to go back to school. Not that youth exonerates Alfons of the things he did, but it points to the vulnerability of young people to the attraction of a charismatic leader.

My only problem with Parallel Journeys was the timeline. Hitler’s 12 year reign is a period I am pretty familiar with, but found myself getting confused in the book timewise and had to go back and reread parts to figure out the timing. It seemed to me that I was reading about 1942, and suddenly it jumped to 1944, with no reference in between. I understand it can be complicated, made more so by the two different lives Ayer is writing about and not a debilitating confusion and certainly did not diminish the real life stories of Alfons and Helen. Perhaps a timeline at the end of the book would be helpful.

Helen died in 1996 at age 86.  A short obituary may be found at Los Angeles Times
Helen may be heard describing the day she sent her daughter into hiding in at United States Holocaust Memorial Museum

This book is recommended for readers’ age 9 and 12.
This book was purchased for my personal library.

Non-Fiction Monday is hosted this week by  Books Together