Don’t You Know There’s a War On? A Novel by Avi 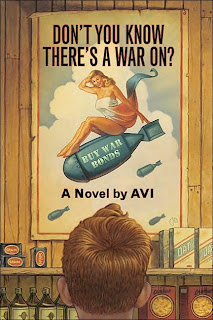 Don’t You Know There’s a War On? provides an amusing look at the life of 11 year old Howie Crispers of Brooklyn, NY during the war, and narrated in a snappy conversational style by his 16 year old self in 1948. The story covers one week, from Monday to Monday beginning on 23 March 1943. Each day Howie and his best friend Denny stop to read the war headlines at a newspaper stand on their way to school and these headlines preface each chapter. The story is driven by two premises. First, Howie and Denny have both decided that the principle of their school, PS 8, is a spy. Second, they each have a serious crush on their teacher Miss Gossim, but have kept it a secret from each other – until now.

On Monday, Howie sees his principle knocking on the front door of a brownstone. Since he is convinced that Dr. Lomister is there on spy business, he feels it is his patriotic duty to spy on the spy. He manages to sneak into the house through the coal chute, winding up in the basement, but manages to get himself upstairs by using the dumbwaiter. Listening at a door, Howie is stunned by what he hears, which has absolutely nothing to do with espionage; and everything to do with the fact that Miss Gossim is going to be fired in a week. Howie escapes from the house and, despite being covered with coal dust, goes to school, arriving in time to see Miss Gossim called down to the principle’s office. It is obvious to Howie that she knows she has been fired when she returns to the classroom. Later in the afternoon, when Howie takes Denny to the brownstone he saw Dr. Lomister enter, they see Miss Gossim coming down the street. She knocks on the door, but no one answers and she leaves. Denny must go home, so Howie follows her and discovers where she lives.

On Tuesday, nothing much happens.

On Wednesday, Howie, his mom and sister Gloria receive a letter from his dad, who is in the merchant marines and sails convoys across the North Atlantic delivering war supplies. His father’s safety is a constant worry for Howie. Later that evening, there is a blackout, and since everyone must be off the streets, Howie is sent out to find Gloria and bring her home. While still out, he is asked by a Civil Defense warden to take a message to his commander, who conveniently is located near Miss Gossim’s apartment building. Caught out in the blackout by another warden, Howie lies and says he lives in her building. Since the warden stands and waits for him to go in, Howie is forced to ring Miss Gossim’s bell, and ends up spending the rest of the blackout with her in her apartment. He tells her he knows she has been fired, and how he found out. She confesses that she is a war bride, marrying someone she had only known a short time. Now she is pregnant and that is the reason she has been fired.

On Thursday, Howie tells Denny about his nighttime visit to Miss Gossim. When they still can’t come up with a workable plan to save her job, Gloria, a devoted fan of radio soap operas, solves the problem for him with an idea inspired by one of her favorite shows.

The rest of the novel involves preparing and instituting the plan. But does it succeed?

This is not really a book about the war as much as it is a book in which the war acts as a catalyst for setting things in motion. Howie speaks exactly like a kid from Brooklyn, and I know what that’s like because I was a kid from Brooklyn. Coal chutes and dumbwaiters existed long past their usefulness though they are pretty much gone now, but Howie gives a good description of them for the reader, along with any other things that might be unfamiliar to today’s kids. It was also a nostalgic read for me because so much of what went on in Howie’s life was similar to mine - the games he mentions, the school procedures, the different class monitors listed on the blackboard and the class picture at the back of the book. And why wouldn’t they be similar - Howie went to PS 8, I went to PS 249. But the difference was the war and Avi accurately and vividly portrays wartime daily life – the anxiety for loved ones in the Armed Services, the fear of Nazis spies, the impact and devastation that the death of a soldier can have on a family, the hardships of rationing, and the small pleasures like listening to stories on the radio, or Saturday morning kids shows at the movie theater. Avi’s descriptions of life in Brooklyn were so realistic that it didn’t surprise me to find out he grew up there too.

The book did bring out one antiquated practice in schools back then. Under normal circumstances, women were not allowed to teach after they married, but because of a teacher shortage during the war, that ban was lifted. However, a pregnant teacher, even if married like Miss Gossim, was not allowed to continue teaching under any circumstances.

Avi has always been a favorite in this house, and when I told Allison that I was reading a book of his, she began to wax nostalgic. And I can see why. I highly recommend Don’t You Know There’s a War On?

This book is recommended for readers aged 9-12.
This book was borrowed from the Webster Branch of the New York Public Library.
Posted by Alex Baugh at 9:56 AM