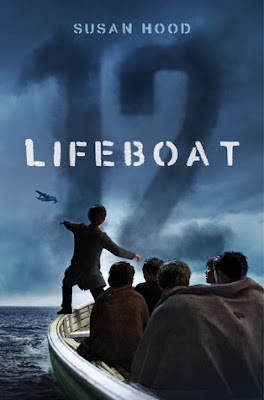 In the summer of 1940, as fear of a German invasion grew, the British government initiated a program called the Children's Overseas Reception Board, or CORB, which purpose was to evacuate British children from England and send them by ship to one of their (then) Dominion countries.

Lifeboat 12 follows the experience of one of the children chosen to be sent to Canada, a boy named Kenneth Sparks, 13, of Wembley in London, the son of working class parents. Kenneth, however, doesn't want to go, thinking his stepmum had finally found a way to be rid of him, even if she did buy him a very good, expensive overcoat to take with him. He was thrilled about getting such a nice coat, even if it was second hand. After all, by the summer of 1940, Ken was used to everything being second hand, makeshift or rationed because of the war. But he still wasn't happy about going to Canada.

Once the Blitz begins, and night after night is spent in a shelter, Ken quickly begins to look forward to leaving England. And he does finally leave in a convoy on Friday, September 13th, sailing on a luxury ocean lined called the City of Benares. And it is luxurious for the evacuees, who are fed wonderful and plentiful food including seconds, provided with brand new toys and games, and clean soft beds, even better than what Ken had at home. Ken makes friends with some of the other boys and spends his time exploring the ship with them. Only the constant lifeboat drills in case of an attack and the convey escorting the ship remind the kids of war they left behind.

That is until September 17th, their fourth day at sea, when a German submarine torpedoes the ship, causing severe damage. Ken heads to his assigned Lifeboat 8, but in all the confusion, he remembers he left his coat behind, the one his stepmum bought and admonished him to take care of and not to lose. Rushing back after retrieving his coat, Ken discovers Lifeboat 8 has left and he ends up squeezing into Lifeboat 12, along with 5 other boys, and 40 adults.

Surrounded by bodies and overturned lifeboats, the survivors in Lifeboat 12 watch as the City of Benares sinks, and wonder when and if they will be rescued. With enough food and water for only eight days, Lifeboat 12 drifts in the rough seas of the open ocean for eight days.

Lifeboat 12 is based on the true story of the torpedoing and sinking of the City of Benares, and while it is a fictionalized telling, it is based on the account of the Kenneth Sparks and other survivors, whom Susan Hood interviewed for this free verse novel (knowing Ken survived isn't a spoiler).

Hood spent a lot of time interviewing Ken just before he passed away and she has really captured his 13 year old self. He is both is appealing and believable, a friendly, lively, bright boy who notices everything around him and is curious about it all. His anger at his family for sending him away feels genuine, as does his fear - going back for his coat so his stepmum won't be angry at him, sitting in an overcrowded lifeboat wondering if he would be rescued - and the disappointment that his parents couldn't see him off when he left, and then having travel alone to London when he returns to England. I liked how Hood has Ken mention in passing that planes are his hobby, rather than making a big deal about it, and he knows them all, knowledge that ultimately saved the people in Lifeboat 12.

Lifeboat 12 is a coming of age story that most readers will find hard to put down. It is divided into three sections - Escape, Afloat, and Rescue, and each section gives a day by day account of what Ken was experiencing. And when you are finished reading Ken's fictionalized story, there is plenty of back matter to explore, including facts about lifeboat 12, information on the people who survived, plenty of photographs, and books for further investigating, interesting websites, and videos, and information about the crewmen, particularly the Asian crew.

Lifeboat 12 is a testament to courage, a gripping, tension filled novel that will have you on the edge of your seat from beginning to end. 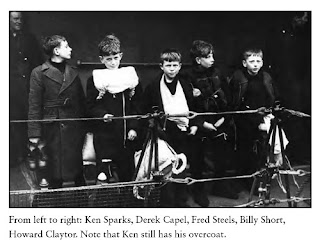 This photo in the back matter really caught my eye. I had done some research years ago on overseas evacuations of British children, including the City of Benares. Sure enough, I had a copy of this picture from The Daily Telegraph and Morning Post dated September 28, 1940, along with this account by Kenneth Sparks. So I can honestly say that Susan Hood really has brought Ken's to life for today's readers.