The Most Dazzling Girl in Berlin by Kip Wilson 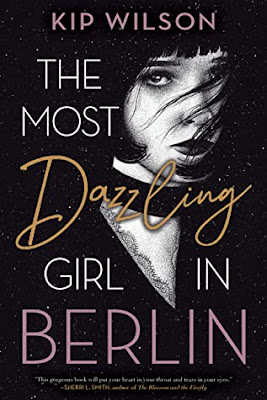 April is National Poetry Month so what better time to read this novel-in-verse by Kip Wilson, author of the excellent White Rose. Like me, Kip has a PhD in German Literature and also seems to have an interest in the Weimar years and its aftermath. After all, how could you write two novels that are this good without some serious interest in this time period?

The story begins in February 1932. Eighteen-year-old Hilde has just aged out of the Catholic orphanage she has lived in since her mother's passing eight years ago, leaving with the clothes on her back, a few possessions, and some Reichsmarks in her pocket. After sleeping a few nights in a park, unable to find a job, Hilde discovers and wanders into a Berlin cabaret called the Café Lila after getting drenched in a rainstorm.

Feeling out of place, but before she can leave, Hilde is stopped by Rosa, a beautiful performer and waitress at the café. Before she knows it, Hilde is waiting tables, serving round after round of drinks to the patrons and, at the end of the night, hired on the spot. Realizing that Hilde has no place to go, Rosa takes her to the home she shares with her Tante Esther.

It doesn't take long for Hilde to realize that Rosa and her aunt are Jewish, that the Café Lila is a queer cabaret, and that she is attracted to Rosa. But, while Hilde quickly finds herself feeling at home in the café, making friends with the other women and working hard waitressing tables, she learns that she is also expected to perform. Although Hilde has a beautiful singing voice and would like to pursue a career in music, she is hesitant to perform at Café Lila.

As Hilde begins to come into her own as a queer woman, and her relationship with Rosa begins to become more mutual, outside in Berlin, things are heating as the political climate changes and Hitler's popularity grows, especially after the runoff election in April 1932. Soon, Brownshirts are everywhere, spreading hate and violence. But when Brownshirt violence comes into Café Lila, will Hilde lose everything she loves and for which she has worked so hard?

I really enjoyed reading The Most Dazzling Girl in Berlin. I've read a lot of books that were written and set in those turbulent last days of the Weimar Republic and this book felt like it could have been written by anyone of those authors. The research is so impeccable that Hilde's Berlin became another important character for me, not just a good setting for a novel. Little details like the park Hilde slept in, or walking alone the Kurfürstendamm, the newspapers of the time, and so much more give the story a real sense of authenticity. I even pulled out my 1928 street map of Berlin to follow Hilde's footsteps whenever possible.

The Weimar period is really an interesting study in contrasts. On the one hand, there were those who wanted the conservatism of Adolf Hitler and the Nazis, on the other, there was the sense of openness and freedom to be who one really is, and as Hilde tries navigate this new-to-her Berlin, I think that Wilson has absolutely captured that dichotomy, presenting the two differences very realistically.

The Most Dazzling Girl in Berlin is a poignant novel, taking place between February and August 1932, and written in spare free verse. Each poem adds to an at times broad, at other times personal picture of the dying of Weimar Republic and people's reactions that Wilson has so brilliantly created. Today's readers will most definitely have no trouble relating to Hilde's coming-of-age story, whether or not they are part of the LGTBQ+ community, and given the times we are living in now. Confession: the biggest surprise for me is just who the most dazzling girl in Berlin turned out to be. I wasn't expecting that.

Be sure to read the back matter, which includes the author's inspiration for this novel, an explanation of what is factual and what is fiction, and a glossary of German words and phrases. You might also be interested in checking out the author's blog for a more personal look at her research and a playlist on Spotify.

Thank you to NetGalley for providing me with a digital ARC