Louisa June and the Nazis in the Waves by L. M. Elliott 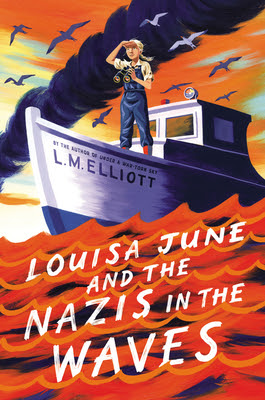 Her older sister Katie is off to welding school in Newport News and older brothers Will joins the merchant marines and Joe joins the navy. When a crew member becomes ill, her father, a tugboat captain, suggests her brother Butler replace him on a trip pushing barges to Philadelphia. Butler is set to graduate high school and begin studying at the College of William and Mary in the fall and it's a good opportunity to earn money for food and books. Of course, this leaves Louisa June and her mother to take care of their 70 acre farm.

Louisa's mother has always suffered from bouts of what the family calls "melancholy" which has recently become more serious now that the war has arrived in Tidewater Virginia. It's Louisa's goal to try and get her mother to smile when the melancholy hits, and since this is a literary family, a good story will often do the trick.

But when tragedy hits the convoy of barges they are pushing, Butler is killed, but  his dad survives. Louisa's mother goes into a full on depression, grieving for Butler. Blaming her husband for his death, and despite the seriousness of his injuries, refusing to allow him back in the house, forcing him to live in the barn.  Luckily, elderly Cousin Belle Archer, who has a few of her own war stories from WWI, is aware of Mama's melancholy, and is only too happy to help Louisa out with food, books and kittens now that running the house and taking care of her parents has become her responsibility. But Louisa wants to do more to help the war effort, like her friend Emmett does, keeping an eye out for Nazis in the waters around the Tidewater.

On what was supposed to be a fun day out, Louisa and Cousin Belle witness a U-boat attack a convoy of merchant ships out in the Chesapeake Bay while relaxing on the beach at Old Point Comfort. They both immediately spring into action to try to help save some of the men. Before long, however, it becomes a family affair, but will it bring the Brookes family some closure on Butler's death and bring them together again or will it split the family even further apart?

I have always enjoyed reading L. M. Elliott's historical novels and this is no exception. And the German submarines lurking in the waters so close to shore isn't a topic that often makes its way into middle grade novels. The story is narrated in the first person by Louisa, who has quite a way with description. And describe she does - giving the reader not just everyday details about what it was like in those early days of the war, but wonderful details about living in Tidewater Virginia. I could almost hear the cry seagulls and smell the salt water.

I also felt that Elliott did a great job tackling the subject of Louisa's mother's depression and how it impacts the entire family. I grew up with a mother depressed over the loss of a child and I could completely empathize with Louisa's attempts to try to lift her mother's moods, not realizing (as I didn't) that she really needed professional help.

Be sure to read the back matter which gives information about some of the topics covers in this book, including German submarines and the merchant marines, kids becoming plane spotter, woman welders like Katie, experiences like Cousin Belle's in WWI, and of course depression.

Louisa June and the Nzies in the Waves is a wonderful companion to L. M. Elliott's earlier novel Across a War-Tossed Sea and I highly recommend both.

Thank you Edelweiss+ for granting me access to a digital version of this book. Be sure to check out the other Marvelous Middle Grade Monday offerings,
now being carried on by Greg at Always in the Middle
Posted by Alex at 5:00 PM