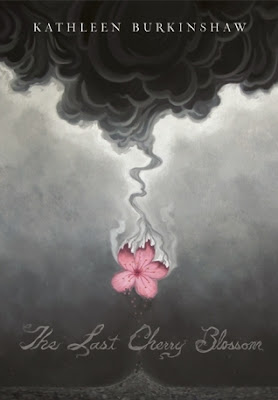 August 6, 2016 marks the 71st anniversary of the bombing of Hiroshima, followed by the bombing of Nagasaki on August 9th.  And by now, most readers are familiar with the story of Sadako and the Thousand Paper Cranes by Eleanor Coerr.  Sadako's compelling story focuses on her illness 9 years after being exposed to the deadly radiation that resulted in the aftermath of the atomic bomb that was dropped on Hiroshima. However, we don't really learn much about what Japan was like during the war, before the atomic bomb destroyed two cities and some many lives.  Until now.

The Last Cherry Blossom is the fictionalized story based on the experiences of the author's mother living in Hiroshima as a child during the war.

Despite the fact that Japan has been at war with the United States since the bombing of Pearl Harbor in 1941, life hasn't been too difficult for 12-year-old Yuriko Ishikawa, affectionately called Joya by her beloved papa.  She is proud of her samurai heritage, and loves to hear papa tell stories about it.  But, when her teacher tells her that she has made a mistake on her koseki or family tree project, Yuriko becomes quite upset, asking papa what she meant.  Instead of an answer, he has the teacher fired.  But why?

Despite that, living on the outskirts of Hiroshima, with papa, owner of a newspaper, and her annoying Aunt Kimiko and five-year-old cousin Genji, the family hasn't suffered many of the usual hardships of war - rationing and making do just don't seem to be in evidence.  Of course, there are air raids, American planes flying overhead, and Yuriko, her best friend Machiko, in fact, all school children are expected to learn how to fight using a bamboo spear, if necessary.  But when Yuriko's papa and Aunt Kimiko both decide to get remarried at the same time, there is still silk to buy for new kimonos.

Yuriko has always cherished the time she spends alone with her papa, and wonders if her new stepmother, Sumiyo-san, now living in the family home, along with Akira-san, Aunt Kimiko's new husband, will understand that.  Happily, Sumiyo-san turns out to be a loving, kind stepmother who understands.  But when the mother of her fired teacher tells her that a man named Nishimoto-san would love to see her, she opens a Pandora's box of family secrets that turns Yuriko's world up-side-down and it is up to Aunt Kimiko to explain things.

Yuriko barely has time to digest what Aunt Kimiko tells her, than the war begins to hit closer to home.  First Tokyo is badly bombed, and, a few months later, an atomic bomb is dropped on Hiroshima, changing Yuriko's life forever.

The Last Cherry Blossom is author Kathleen Burkinshaw's debut novel, and I can only imagine how difficult it must have been to write her mother's story and yet, how necessary.  Perhaps having listened to her mother's memories of Japan during WWII and of her survival after the bomb was dropped while growing up is what made this such a realistic narrative.  Told in the first person by Yuriko, the reader is pulled into the story right from the start.

The Last Cherry Blossom is a shattering story, and part of what makes it so devastating is the detailed descriptions of daily life and favorite special occasions that Yuriko lovingly provides when all the while the reader knows what was coming.  I did like reading about the happy times, so filled with Japanese culture, such as how Yuriko's family celebrated the weddings, as well as Oshagatsu (New Year's Celebration) and Sakura Hanami (the Cherry Blossom Festival) and other festivals, though the chohei pati, the celebration party families have when a son is sent to war, is definitely not a happy occasion.  It is supposed to be an honor to fight for Japan, but in reality, no one feels very honored.

(Burkinshaw does use lots of Japanese words throughout the novel, giving this a real feeling of authenticity, and there is an extensive Glossary in the back matter to help readers.)

In fact, the chohei pati points to the ways in which propaganda is used during war by all countries. At the beginning of each chapter, there are quotes from radio addresses, newspapers and propaganda posters about how well Imperial Japan is doing in the war or what is expected of civilians at home, most of which is incorrect, but people are expected to simple believe what they are told.

The Last Cherry Blossom is a story of unfathomable loss, but also of hope, resilience, and survival. Paired with Sadako and the Thousand Paper Cranes, both these stories should stand as a cautionary tale about war and the use of what we would now call weapons of mass destruction, and never forget that, as Burkinshaw reminds us in her Afterword, "the victims were all someone's mother, father, brother, sister, or child."  It was true then, and is still true today.

This book is recommended for readers age 11+
This book was an EARC received from Edelweiss/Above the Treeline
Posted by Alex at 8:15 AM