After the War: From Auschwitz to Ambleside by Tom Palmer 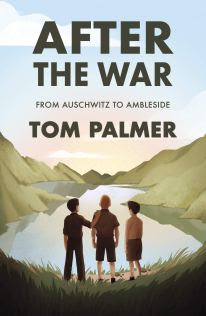 Tom Palmer used to write books for kids about sports like rugby and football (soccer), but more recently he has turned his storytelling skills to historical fiction. Last year, I read D-Day Dog, a story I found to be very informative, as does the present-day protagonist Jack. This year, I was intrigued to read After the War after hearing about it for an event on World Book Day, March 4, 2021 in connection with the Anne Frank Trust.

After the War is a fictionalized story based on true events that happened after the war ended. In 1945, 300 Jewish children who had survived life in a Nazi concentration camp during the Holocaust were sent directly to the Lake District in England.

It's summer 1945 when 15-year-old Yossi, and his two friends Mordecai and Leo arrive in England in one of 10 planes, each carrying 30 young Holocaust survivors. They have been told they are safe now, that they will all have enough to eat and a room of their own with a bed and electricity, and most importantly, there will be no guards. But after six years in a concentration camp, could they really trust that?

Arriving at the Calgarth Estates on Lake Windmere, where they will live for the next few months, the children find it difficult to trust people and what they say, and to give up the survival habits that kept them alive in Auschwitz, especially when it comes to food. So despite there always being enough to eat, Yossi, Leo, and Mordedai stuff as much food as they can into their pockets to save for later - just in case there isn't enough food then.

Slowly, however, they begin to gain weight, becoming healthier and stronger. They even begin to develop trust again, thanks to the the kindness of the people of the Lake District and those in charge of them at Lake Windmere. Soon, they are back in school and learning English, and since their stay is only temporary, they also need to start thinking about the future and what they will do. The Red Cross arrives visits to obtain information about the children's families in order to try to reunite them with relatives who might have also survived. Yossi hopes that they will find his father, whom he wants to believe is still alive, even though they were separated on a death march towards the end of the war. Yossi watched as his younger sisters and mother went to the gas chambers the night they arrived in Auschwitz, but he and his father were selected to work.

Hoping against hope that the Red Cross will find his father, Yossi is unable to think about moving on. The three friends, who have become family to each other, want to stay together, but can't agree on how to do that. Mordecai, who is deeply religious, wants to join the Jewish community in Leeds after they reached out to the children at Lake Windmere, while Leo wants to go to Palestine, believing they would be safest there.

But recovery and recuperation aren't as easy as clean sheets and enough to eat. Yossi, who is the main protagonist, is haunted by his memories of the things he witnessed before the war in Poland after the Nazis invaded and life first in the ghetto and later in Auschwitz. These memories are seamlessly woven into the story as incidents in Yossi's present ignite flashbacks in his past. Sensitive and caring, Yossi has a minor breakdown one day when he seems to have given up and, not seeing any point to it, refuses to get out of bed. Laying there, he recalls his father's words "...if we let ourselves go, the Germans will think they are right, that we are not human." His father believed that getting up and washing every morning in Auschwitz was an act of defiance, of resistance to the Nazis, and Yossi determines it is still true. Will the memory of his father give Yossi what he needs to be able to get up and move on?

People sometimes forget that when a war ends, it isn't over, that there are always serious after effects. In this short, very readable novel, those after effects are clearly presented. Palmer depicts the children's survivor behavior in their present circumstances, relating it back to what happened in the concentration camps in the most heartbreakingly poignant way. And while he doesn't graphically describe the cruelty and the atrocities committed by the Nazis against Jewish men, women, and children, he gives enough detail that readers can get a clear picture of what happened then and the challenges the children now face.

After the War is a powerful book about courage, friendship, hope and resilience and I can't recommend it highly enough.

Be sure to visit Tom Palmer's After the War webpage for more information, including a link to read the first chapter, a link to hear about his researching and writing After the War and so much more.

After the War is published by Barrington Stoke in a dyslexic friendly font, layout, spacing and page tint that makes it easier to read (and since I'm dyslexic, I can honestly say it does).

This book is recommended for readers age 10+
This book was purchased for my personal library
Posted by Alex at 9:42 AM