Stranger on the Home Front: A Story of Indian Immigrants and World War I (I Am American series) by Maya Chhabra 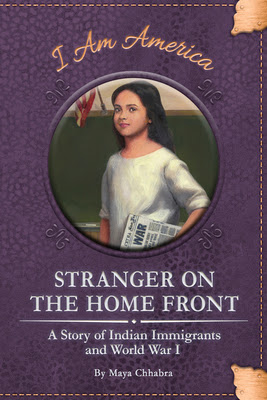 It's Autumn 1916 and the United States has still not entered the war that is raging in Europe. Margaret Singh, 11, and her parents have just arrived from their home in San Francisco to attend the annual Sikh festival Guru Nanak Gurpurab in Stockton., California. But when she overhears her father speaking with the other Sikh men about his contributions to their cause, Margaret has reason to worry. They were talking about the German backers of the Ghadar Party and a ship carrying weapons that had been caught by the British. Was her father involved in this? Since America wasn't in the war yet, it wouldn't be treason to work with Germany, but... And unfortunately, Margaret isn't the only one to hear this conversation. As soon as she noticed him, the other eavesdropper vanished.

When Margaret's father discovers she had listened in on the conversation, he explains that the members of the Ghadar Party are fighting for India's independence, that if they could get Indian soldiers to revolt against the British, India would be free.

Margaret, whose father is Indian from the Punjab region and whose mother is white, attends the better funded white public school rather than the poorly funded segregated school most kids with dark skin are forced to go to after her mother begged the principal to accept her. Her best friend is Bettina, whose father is from Germany, and who excels in German, and Margaret's nemesis is new girl Agnes Fitzgerald, who just didn't want any dark-skinned students in white school.

Then, in the Spring of 1917, America enters the war and everything changes. First, Margaret's father is arrested for his participation in the Ghadar Party, but quickly released. When Margaret returns to school, Bettina tells her she must call her Betty from now on. Pretty soon, Betty begins to work hard to prove her patriotism by volunteering for Junior Red Cross. It doesn't take long for their friendship to fall apart as Margaret becomes more aware of the hypocrisy of America's idealistic policies and the reality of its racist policies and immigration laws, and begins to speak her mind about her.

Margaret also begins to question who she is and where her allegiances are. Margaret is an American citizen because she was born here, but her Indian father can never become an American citizen, and then she learns that her mother lost her American citizenship when she married her father. Knowing this and seeing how quickly Bettina was willing to deny her German roots, it's no wonder that Margaret also wonders where she really belongs and what being an American means to her now.

Although Margaret's story is fiction, it is based on real events in the United States during World War I. Narrated by Margaret in the first person, and using newspaper clippings and her diary entries, readers get a rounded picture of just what like was like for a biracial girl and her family in this country between 1916-1918. As the story moves along, readers can really see how much Margaret grows and becomes more aware of the world around her.

Her parents are both portrayed as kind and gentle, though her father continues to want independence for India. He was never a member of the Ghadar Party, which is why he was released quickly and not deported, but readers get lots of information about these events through him. The author has included A Note on Vocabulary in the front matter to help readers unfamiliar with Indian culture and the Hindu religion, back matter includes an information Author's Note, a Timeline and photographs from the time. There are black-and-white illustrations throughout.

Stranger on the Home Front is an great book for readers who like learning about different cultures and historical fiction.

This book is recommended for readers age 9+
This book was an eARC gratefully received from NetGalley
Posted by Alex at 11:34 AM