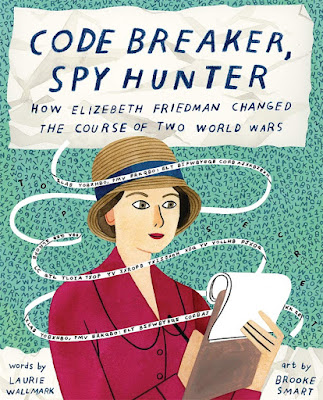 This picture book for older readers tells the story of a remarkable woman who developed new code- making and breaking techniques, helped capture bootleggers, and even managed to catch a few Nazi spies.

When she was a child, Elizebeth Smith loved poetry and Shakespeare was her favorite author. She appreciated the structure and patterns she noticed in his poetry. Not surprisingly, Elizebeth graduated college in 1915 with a degree in English Lit, but she also studied Latin, Greek, and German. 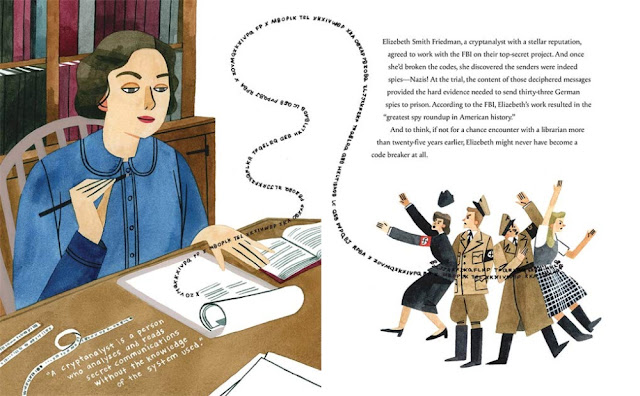 Looking for a job in Chicago, Elizebeth was introduced to George Fabyan, a wealthy eccentric Shakespeare fan who invited her to become part of a group of researchers on his estate, Riverbank, who were looking for proof that Francis Bacon was the real writer of Shakespeare's plays. Her job was to look for secret messages left by Bacon in the plays. Who knew this job would eventually lead to Elizebeth's helping to capture Nazi spies?

Well, Elizebeth never found any coded messages but she did find friendship in the person of William Friedman, a scientist. The two friends spent part of their time together devising secret notes and challenging each other to decode them. Soon, they were in love and married.

When the United States entered WWI in 1917, Riverbank was converted to a code-breaking unit called the Riverbank Department of Ciphers. Elizebeth, William, and their cipher staff set about decoding enemy communications and developing new code-breaking techniques.

After the war, Elizebeth went on the work for the Coast Guard. They needed help with smugglers who were hiding bootleg liquor and communicating with each other using coded messages. Could Elizebeth crack the codes, so the bootleggers could be caught? She could and did, often testifying at the trials of the smugglers. 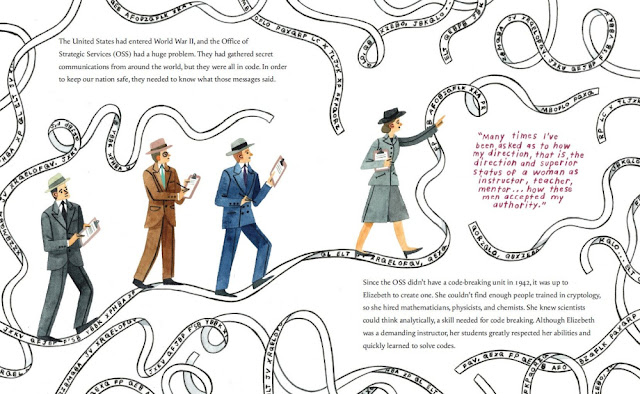 When the United States entered WWII, Elizabeth's code-breaking skills were once again needed. In 1942, she joined the newly formed Office of Strategic Services (OSS) and began setting up a code-breaking unit. Yet, when her decoding talents helped with the capture of some Nazi spies, the FBI director took all the credit for himself. Nevertheless, Elizebeth carried on and helped put American Velvalee Dickinson in prison for spying for the Japanese by decoding her letters about buying "dolls." 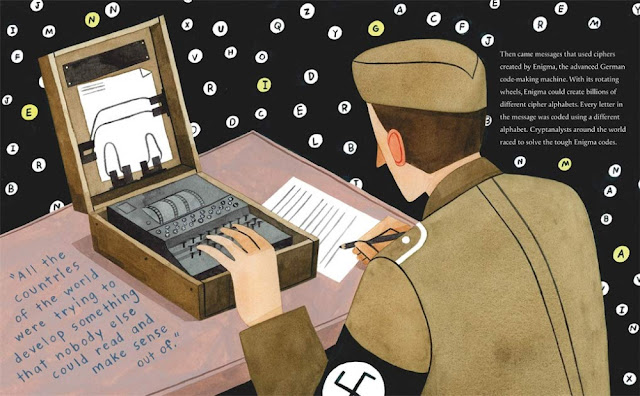 Then came Germany's Enigma code-making machine, which created seemingly unbreakable codes. Thanks to a lazy Enigma operator, Elizabeth and her staff were about to break the codes after months of hard work. They didn't know that in England, code-breaker Alan Turing had also broken the Enigma codes.

I loved the way Elizebeth's own words were strategically worked into the stylized watercolor and gouache illustrations so readers can get a real sense of who Elizebeth was and what she thought about the groundbreaking work she did. I also loved the ribbons of coded messages the wrap around a number of pages like a lasso capturing secrets, including the Nazis that Elizebeth's decoded messages helped catch. And if you are interested in trying your hand at decoding. those ribbons are coded messages. Check out the back matter for help solving them.

Code Breaker, Spy Hunter is a fascinating biography about a woman who did so much and received so little credit for her hard work. It is packed with interesting information about Elizebeth's personal and professional life.

Besides information about Codes and Ciphers, back matter includes a challenge to Crack The Code, information on Cryptography Today, a Timeline and a Selected Bibliography.

You can also find some Activity Sheets to download courtesy of the publisher, Abrams Books HERE

This book is recommended for readers age 8+
This book was borrowed from the Queens Public Library
Posted by Alex at 6:22 PM