Twenty-One Steps: Guarding the Tomb of the Unknown Soldier by Jeff Gottesfeld, illustrated by Matt Tavares 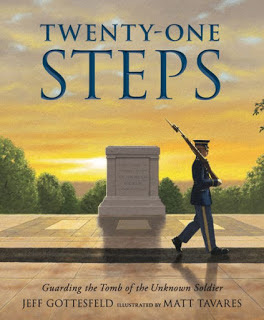 Twenty-One Steps: Guarding the Tomb of the Unknown Soldier
by Jeff Gottesfeld, illustrated by Matt Tavares
Candlewick Press, 2021, 32 pages
How many times have we watched an American president or a visiting foreign dignitary laying a wrath on the Tomb of the Unknown Soldier in Arlington National Cemetery and not really thought much about either the unknown soldier or the soldier guarding him? Maybe you've visited even the Tomb of the Unknown Soldier on a school trip to Washington, DC and have a photo you took somewhere on your phone. We may all think differently after reading this excellent picture book for older readers that focuses on this important monument honoring America's unknown fallen heroes and the select few who guard them.

Told in the first person voice of one unknown soldier standing in place for all, he tells the reader about the many soldiers who were once the living and loved sons, fathers, husbands, brothers who fell in battle during WWI. When the war was over, most of them went home to families who would mourn them, burying them in graves that would remember and honor them. But for others, those were could not be identified, there was not place to honor the sacrifice they had made.
In 1921, our narrator was given a hero's funeral, laying in state in the Capital in Washington, DC, where mourners who had lost loved ones that never came home could grieve and find some sense of closure. Then, on November 11th, at 11 o'clock, our narrator's symbolic coffin was taken to Arlington National Cemetery for burial. From then on, the narrator says he was always alone. Over the years, people began to visit the hillcrest where the Tomb of the Unknown Soldier is, but, he says, it was mostly "for the view and not the meaning." 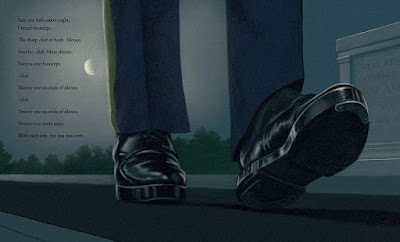 Then, at the stroke of midnight on July 2,1937, our unknown soldier was suddenly not longer alone. From then on, every day and night, in all kinds of weather, the sentinel guards were there, to honor the unknown fallen. Men and women from every race, religion and creed are part of the Tomb Guard. Marching back and forth in their vigil, each guard takes 21 steps in one direction, followed by 21 seconds of silence, then 21 steps back and 21 seconds of silence over and over on his watch and each step with its own click. To understand just how dedicated the Tomb Guard's are to their watch, readers are first introduced to The Sentinel's Creed. 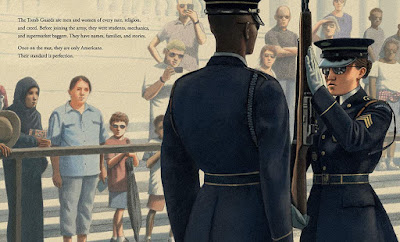 Eventually, the remains of an unknown soldier from WWII, the Korean War and the Vietnam War were also laid to rest in the Tomb of the Unknown Soldier. Just like our WWI narrator, these fallen soldiers first lay in state at the Capital, and once again, mourners could make them their owe, because "[t]heir stories were different and the same." Interestingly, thanks to DNA, the soldier from the Vietnam War was identified and returned to his family. 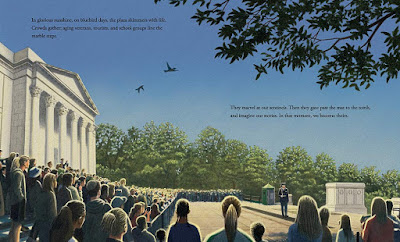 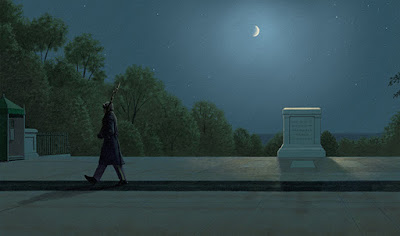 This year will mark the 100th anniversary of the Tomb of the Unknown Solider. If you are looking for a picture book to share with your young readers this coming Memorial Day, this is definitely one of the better choices for that solemn day.
This book is recommended for readers age 7+
I received this book for free from Candlewick Press in exchange review.
Posted by Alex at 10:00 AM