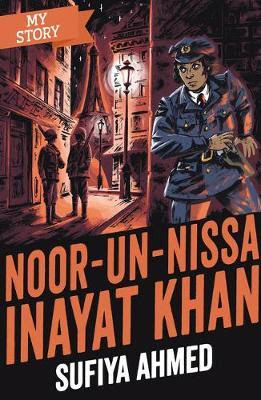 Noor was an unusual yet totally logical choice for the SOE. She was born in Moscow, Russia to a white American mother and an Indian Muslim father. The family moved from Moscow in 1914 to London, where Noor's three siblings were born, and finally, in 1920, they settled in Paris, France.

Ahmed begins Noor's story in May 1927, as the family journeys to India to visit the place where her father had died in February. It's there that Noor begins to realize just what it means to be her father's daughter. It makes her a princess with a famous royal ancestor - Tipu Sultan, who was a hero of colonial resistance and had been killed in 1799, "fighting like a tiger to save his people." (pg 17)

Fast forward to June 1940. With the Nazi invasion of France, the Khan family leaves Paris and relocates in England, just as the Blitz begins in full force. Finding rooms in Oxford, Noor's brother Vilayat wants nothing more than to join the Royal Air Force (RAF), but ends up in the Navy instead. Meanwhile, Noor uses her Red Cross certificate working in a military hospital. But getting caught in a daylight air raid while on a day trip into London makes Noor realize she wants to do more for the war effort. She decides to join the WAAF (Women's Auxiliary Air Force). There, she becomes Nora Baker and is sent to Yorkshire for training in November 1940, where the weather is cold and windy, and the exercises are physically challenging. It is also there she discovers she has a real ability for Morse Code.

After her WAAF training is complete, Noor is assigned to work in Bomber Command, but when she applies for a new commission, she's sent to Wiltshire for a 7-week training course. Afterwards, she is called for an interview, but when they ask her how she feels about Indian Independence from the British Empire, she is convinced that her answer, that she "believes the Indian people should be given their freedom," (pg 64) spells the end of her career.

Instead, thanks to her excellent communication skills and her ability to speak French like a native, Noor is asked to become part of Churchill's SOE and begins training for her eventual return to France to work undercover as the first woman radio operator with the Resistance there under the code name Madeleine. The majority of the book is devoted to Noor's war work and are some really exciting chapters. Unfortunately, Noor was betrayed and as she is getting ready to leave France, she makes a poor decision and ends up captured by the Gestapo. It is, as Ahmed writes, the beginning of the end.

My Story: Noor-Un-Nissa Inayat Khan is written in the first person in Noor's voice. The book is organized in chapters that reflect Noor's activities in a given month. This makes it easier for readers to follow Noor's many adventures in India, England, and France.

I was very curious to read My Story: Noor-Un-Nissa Inayat Khan, first because I already knew about her life and work during WWII in France, and second, I was curious to see how it would be handled for young readers. And I thought that given the complexity of the subject matter, Sufiya Ahmed to a really great job of synthesizing the material for her target age group. Most kids have probably never heard of Noor, and it is especially important for young Muslim readers to know about her.

What was particilarly good to see is that yes, Noor is a hero, but as Ahmed shows, she is not without flaws, doubts, and weaknesses, and sometimes she's even headstrong and impulsive. But Ahmed also shows how her parents were great influences on Noor, as were her ancestors.

One thing of note, Ahmed points out, is that Noor had originally wanted to become a children's author. She loved tells tales to her siblings growing up and had even published a book of short stories called Twenty Jātaka Tales in 1939 and which I highly recommend since it is still in print.

My Story: Noor-Un-Nissa Inayat Khan is a definite must read for young readers interested in WWII history and/or women war heroes. It should be of particular interest to young Muslim readers.

This book is recommended for readers age 8+
This book was purchased for my personal library
Posted by Alex at 10:01 AM