Attacked at Sea: A True World War II Story of a Family's Fight for Survival by Michael J. Tougias and Alison O'Leary 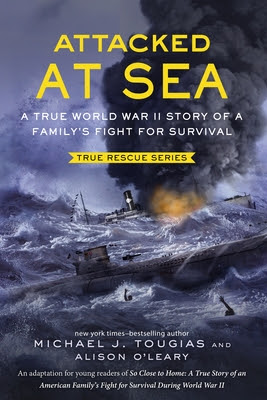 In 1941, the Downs family - father Ray, mother Ina, Lucille, 11, and Sonny, 8 - had hoped that by spending some time in Columbia, South America and Costa Rica in Central America, where Ray worked for the United Fruit Company, they would be able to save enough money to buy a house and new car when they returned to the United States. But now that the US had entered the war, they decided it was time to return to their home in Texas and their oldest son Terry, 14, who was staying with his grandparents. Ray also hoped to join the Marines when they were back in the U.S.

On May12, 1942, the family set sail from Costa Rica on the SS Heredia, a luxury liner turner freighter. The Downs parents were somewhat concerned about the trip. German submarines had been hunting, attacking and sinking American ships in the Atlantic Ocean and along the eastern seaboard, and now they had begun to infiltrate the Caribbean and the Gulf of Mexico as well.

The ship was equipped two mounted machine guns and Navy Armed Guards who kept watch 24 hours a day for German submarines. Sonny and Lucille were curious about everything on the ship and the crew willingly answered their questions. In fact, as the only two kids on board, they were treated somewhat specially by the captain and crew.

Meanwhile, two German subs had entered the Gulf on the lookout for ships like the Heredia. Most of the Heredia's trip was uneventful, but close to home, the Navy guards thought they spotted something in the water and the captain decided to change course for Corpus Christi, Texas to see if he could get any information. The Downs family, ready to be home, wanted to get off the ship in Corpus Christi, which was closer to their home, but were not permitted to. They were scheduled to arrive in New Orleans the next day.

That night, while the passengers were sleeping, the Heredia was hit with a torpedo, followed by more hits. The Downs family managed to make it out of their two staterooms together, but were separated by a rush of water on the deck that sent Ray, Ina and Sonny into the Gulf. 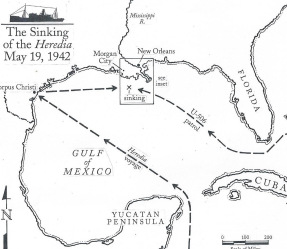 All four family members survived being sent overboard. Eventually, Sonny found his father, and together with the captain and another passenger managed to get one of the ship's rafts in the water. Lucille was found on the ship by one of the crew who convinced her to jump overboard. Once they were in the water and together with other crew members, he fashioned a raft out of a hatch cover for her to sit on while they held it and swam away from the sinking ship. Ina landed in a slick of warm gooey oil that coated her face, eyes and the coat she had on. Unable to see very well, Ina clung to a piece of flotsam.

The family spent 24 hours in the water before they were rescued, during which time they suffered from hypothermia, dehydration, and sharks swimming around them. The time spent in the water, hoping to be rescued in time, makes up the bulk of the book.

Attacked at Sea is a compelling story of courage and resilience, all the more so because it is not fiction. In fact, I could not put it down. Tougias and O'Leary present the events in the kind of objective journalistic style, including details that fiction might leave out. The writing style, though less emotional that fiction, feels all the more compelling. What is really interesting is the way Tougias told the story from the points of view of each family member individually, as well as the two German captains of the submarines patrolling the Gulf for ships to add to their records.

Tougias and O'Leary also continue the story with somewhat detailed information of the aftermath of the sinking of the Heredia and the impact it had on the lives of those they wrote about. To date, only Sonny is the only family member still living.

Back matter includes A Note from the Authors and an extensive Bibliography. Also included are photographs of the family, the German captains, the ship, and some crew.

Attacked at Sea should appeal to anyone interested in exciting true WWII stories.

This book is recommended for readers age 10+
This book was an EARC gratefully received from NetGalley
Posted by Alex at 9:48 AM