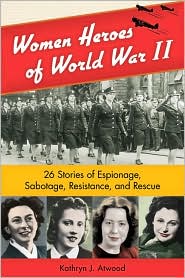 In Women Heroes of World War II, Kathryn Atwood has written a very moving account of 26 strong, courageous women who stood up to the Nazi scourge at great risk to their own lives. Some joined underground resistance movements in Nazi-occupied countries, others rescued Jews and Allied soldiers caught behind enemy lines or worked as spies, mingling with the enemy to gather useful information. And all of their stories are amazing.


In Poland, 19-year-old Irene Gut worked for a high ranking German officer in his villa. She was able to hide 12 Jews in the basement of the house, right under his nose. When he found out, he offered to keep quiet, but at a high price. Irene realized that the fate of 12 human beings rested on whether or not she would accept the offer.

Sophie Scholl, a college student in Munich, Germany wasn’t much older than Irene when she began her Resistance activities. Along with 10 others including her brother Hans, Sophie belonged to the White Rose (die Weiße Rose.) The group wrote and distributed six extensive anti-Nazi leaflets urging people to denounce Hitler’s government in word and deed. Anti-Nazi behavior was considered treason, punishable by death. Sophie and the other members of the White Rose knew the consequences of their actions, but continued their activities.

Other women in Women Heroes of World War II were surprises to me, for example, Josephine Baker and Marlene Dietrich. Josephine Baker, an African-American, had lived in Paris for many years after leaving the US in part because of the racism she encountered here. As an entertainer, Josephine had the perfect cover for a spying. Before France fell to the Nazis, Josephine did some espionage working for the Deuxième Bureau, a French intelligence agency. Her celebrity status allowed her to mingle at parties where she would listen in on conversations and acquire much need information

Marlene Dietrich, though German born, was an American citizen who worked against the Nazis and volunteered to entertain troops for the USO, often at great risk to herself. Sometimes, she was so close to the front lines, she could hear gunfire and bombs going off. When she started to use her signature song, Lilie Marlene, in English for the troops, the Nazis were livid, that had been their World War I song.

These are just a few examples of the lives of the extraordinary women who risked everything to help others in very dangerous situations that are included in this book. Though every story is different, the women were motivated by the same thing: when the time came, they did what they felt was right.

Women Heroes of World War II is a well written, well researched book. Ms. Atwood profiles the resistance activities of women from eight countries: Germany, Poland, France, The Netherlands, Belgium, Denmark, Great Britain and the United States. There is also a brief summary of the way in which each country entered World War II. This information really helps the reader appreciate the dangers and obstacles these woman faced. Each woman’s story is also supplemented with additional material, for example, passages from the leaflets written by Sophie Scholl and the White Rose, or the edict issued when Denmark was forced to surrender to the Germans. At the end of every woman’s story is a list of resources where the reader can go to find more information about her. The beauty of the organization of this book is that it can be read from cover to cover, as I did, or in parts. Each narrative stands on it own. This makes it ideal as a teaching tool and I can’t recommend it highly enough.

Women Heroes of World War II is recommended for readers age 12 and up.
This book was purchased for my personal library.

See Goodreads for an interesting story about how Kathryn Atwood touched history while writing Women Heroes of World War II.