Chance: Escape from the Holocaust written and illustrated by Uri Shulevitz 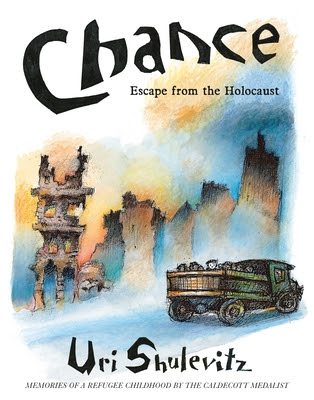 If the name Uri Shulevitz sounds familiar to you, it is probably because he has won four Caldecott Medals in his career as a children's book writer and illustrator. What most people don't know is that Uri and his parents managed to escape the Holocaust by, as Uri writes, "blind chance deciding [their] fate." (pg 65)

Living in Warsaw, Poland with his parents, Uri is only 4-years-old and a budding artist specializing in stick figures when the Nazis begin bombing his country before they invade it. No longer feeling safe, first his father leaves and makes his way to Bialystok, then part of the Soviet Union. Finding a place to live and a job, he tries to return to his family, but is caught and returned to Bialystok. Instead of going back to them, he writes for Uri and his mother to join him. Traveling by smuggler's truck and on foot, mother and son make it to the Soviet Union, leaving all their family behind in Poland.

But when the Soviets order refugees to register for Russian citizenship, the Shulevitz family is denied because of Uri's name. The official is sure he was named after a well-known Zionist. When his father loses his job for not being a citizen, the family finds themselves without an income. Luckily, Uri's father finds another job, but soon, they are again forced to move, and find themselves in a labor camp in the Archangel region of Russia, when Uri is 5-years-old.

It is there that the Jewish people are told that they are no longer considered enemies of the Soviet Union now that the Germans are attempting to invade Russia, and that they are free to travel anywhere they wished. When Uri is 7-year-old, the family travels to Soviet Turkestan. They spend three year's there, often without any food in freezing cold winters and unbearably hoy summers, until the war finally ends.

But just because the war is over, doesn't mean things return to what they once were. Instead, when the family goes back to Poland, they are greeted with rampant anti-Semitism and the sad news that  no other family has survived the Holocaust. Once again, they are on the move, ending up in a Displaced Persons camp in Bavaria. There, in 1946, Uri's father discovers that a brother is also still alive. and living in Paris. The Shulevitz's leave the DP camp for Paris.

Although Uri Shulevitz's first person narrative gives a linear account of how he and his parents were lucky enough to not fall into the hands of the Germans, he does so through a series of linked vignettes and his own drawings.  And he chronicles what happened to them during that time, in such a way that it feels almost intimate, like his talking directly to you, and only you. And given how much the Shulevitz family experienced, it's hard to believe this chronicle only covers 8 years of Uri's life, from 4 to 12.

Most of what he is relating is wrapped in anti-Semitism, hate, starvation, illness, separation and loss, but there are, of course, also moments of laughter, of kindness, of sharing and helping, reminding the reader that no matter how terrible war is, there are still some good people. What clearly stands out is just how much love this family had for each other. If they hadn't, they just might not have survived. Uri says one of the things that really sustained him was his mother's stories. And all through their ordeal, both his mother and father encouraged Uri to continue drawing.

Chance: Escape from the Holocaust is an interesting account in that it is almost devoid of Nazis. It is not the kind of Holocaust story we are accustomed to reading. But it does gives young readers yet another look at what being a Jewish family in Nazi occupied Europe and their enemy the Soviet Union was like. We keep learning more and more about the Holocaust, thanks to survivors like Uri sharing their stories.

This book is recommended for readers age 9+
This book was an eARC gratefully received from the publisher.
Posted by Alex at 6:45 PM