How I Learned Geography written and illustrated by Uri Shulevitz 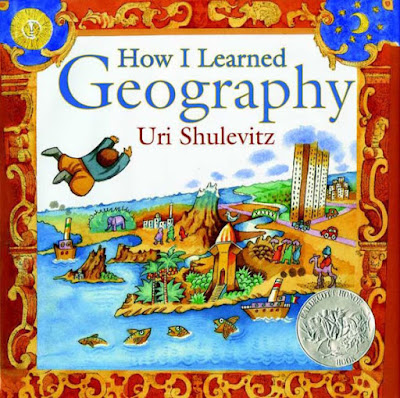 How I Learned Geography
written and illustrated by Uri Shulevitz
Farrar, Straus and Giroux, 2008, 32 pages
In his powerful memoir Chance, Escape from the Holocaust, recalls the time when his family was living in Turkestan and his family went to the market to buy bread, but came home with an enormous, colorful map instead. I found the story particularly interesting because I had read Uri Shulevitz's picture book How I Learned Geography when it first came out in 2008.

In September, 1939, Uri and his family are forced to flee their home in Warsaw, Poland when the Nazis invade their country, leaving almost everything they owned behind. They flee far east, eventually coming to a city "...of houses made of clay, straw, and camel dung, surrounded by dusty steppes..." that was very hot in summer and very cold in winter. 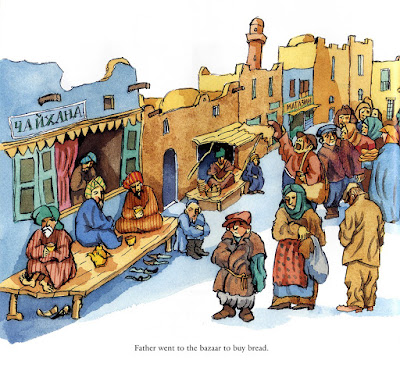 One day, Uri's father goes to the market to buy some bread. Late in the evening, he comes home but without any food for the family to eat. Instead he has bought a large, colorful map of the world. Angry, Uri and his mother both go to bed hungry, listening to the couple who lived with them in their small room smacking their lips while they eat what little bread they have. 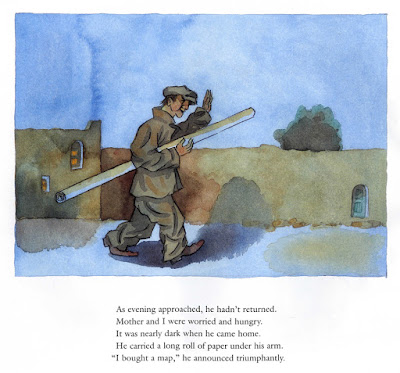 The next day, Uri's father hand the map, which covers the entire wall, and their "...cheerless room was flooded with color." Fascinated with it, Uri spends his days studying every detail of the map, even drawing it on whatever scrape of paper he could find. 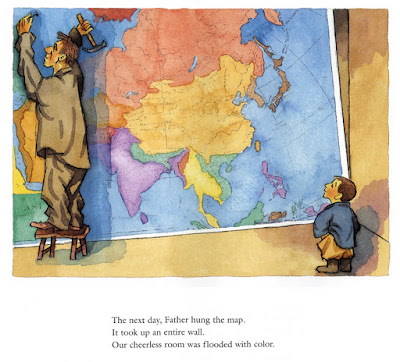 Thanks to that map and what looked like a foolish purchase, Uri finds escape from the difficult conditions he and his parents finds themselves in. Uri uses his imagination to travel far and wide, from deserts and snowy mountain tops, to the tropics and to big cities, spending ..."enchanted hours far, far from [their] hunger and misery."
How I learned Geography is a poignantly written story, told in Shulevitz's straightforward, but spare language. He doesn't go into describing things in depth, allowing his own watercolor and ink illustrations to fill in the details for his. And they do - wonderfully well. Pay particular attention to the variety of facial  expressions and body language Shulevitz has captured. For instance, take a look at how Uri's father's changes in the three illustrations above.
How I Learned Geography has a kind of Jack and the Beanstalk feeling to it, where an act of folly turns out to be just the thing that is needed. Uri's family ended up impoverished and hungry because of the Nazis invading their homeland, Jack's because of the giant stealing their possessions. The difference, of course, is that Uri's story is based on his life.
This book is recommended for readers age 6+
This book was borrowed from the NYPL
Posted by Alex at 11:03 AM