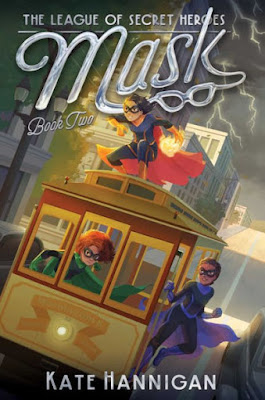 I was really excited to read Cape, book 1 of The League of Secret Heroes trilogy, so I was really looking forward to reading book 2. And Mask does not disappoint. Set during WWII, which happens to be the golden age of comic books, the League of Secret Heroes is part comic book, but mostly novel, and consists of Josie O'Mally (Cape), a white Irish American girl from New York City, Akiko Nakano (Mask), a Japanese American girl from San Francisco, and Mae Crumpler (Boots), an African American girl from Chicago. When the three of them meet, they discover that together their individual superpowers can be released. And it's a good thing because all their comic book superheroes like Zenobia and Hauntima are either gone or merely ghosts of their former selves and losing their powers quickly.

After defeating the Hissler in Philadelphia, a Hitler follower who was trying to get coding secrets, the three girls a/k/a the Infinity Trinity have teleported themselves to San Francisco. This used to be Akiko's home until President Roosevelt's Executive Order 9066 for the roundup of all persons of Japanese ancestry who were then transported to internment camps. This included Akiko's family, who were sent to the Manzanar, where they still are. Except for her brother who is serving in the Japanese American 422nd Infantry Regiment and her mother who is missing.

But our superheroes no sooner arrive in San Francisco, then they receive a coded message and head to San Francisco Bay, were the navy has docked several ships, to try to decipher it. Then, just as Akiko thinks she's spotted her mother walking with a suspected spy in the crowd, a parade of bagpipers go by, and she loses her. The parade is followed by a giant blimp flying overhead, navigated by Side-Splitter, and dropping bomb balloons. Suddenly, there are a lot of clowns, all dressed alike, swarming the waterfront, ready to do Side-Splitter's bidding. And Side-Splitter knows just who the Infinity Trinity is. After a battle between them on the waterfront, the girls finally head to the new League of Secret Heroes headquarters, thinking Mrs. B had been the one to leave the coded not for them.

It turns out that two crack cryptologists, Genevieve Grotjan and Elizabeth Friedman, had left the note, hoping for the Infinity Trinity's help decoding some messages they were sure was a business owner sending secret codes to the enemy. Between Akiko's missing mother, the balloon bombing Side-Splitter and his minions of devoted clowns, and now decoding a spies messages, Josie, Akiko, and Mae have a lot to work on. If only their favorite superheroes were able to help.

Mask is every bit as exciting as Cape. Hannigan has managed to blend fantasy and reality in such a way that the adventure never stops nor does the suspense. And just as she had in Cape, she's brought in a number of historical figures (Elizabeth and Genevieve and Noor Inayat Khan, and Velvalee Dickinson) and believably blended them into the story - but never loses the comic book feeling that is so much a part of this series.

But at the same time that the Infinity Trinity, Side-Splitter, (and the Hissler from the first book) are perfect comic book characters, there is a lot of history to be found woven throughout the adventure. America's internment camps, the racism directed a Japanese Americans, the magnitude of what they lost when Executive Order 9066 went into effect, the 422nd infantry Regiment are all a part of Akiko's story. The idea for the bomb balloons may sound far fetched but they also stem from reality. How? Read the Author's Note to find out about this and other interesting facts that have been worked into the story.

This is a second book in a series and there is always the question of whether book 2 will stand alone. I found that whenever the story referred back to the first book, there was enough background information that if you haven't read it, you wouldn't get lost.

If you are looking for a fun work of historical fiction, Mask (and Cape) are sure to please.

This book is recommended for readers age 9+
This book was an eARC gratefully received from NetGalley
Posted by Alex at 11:08 AM