The Assignment by Liza M. Wiemer 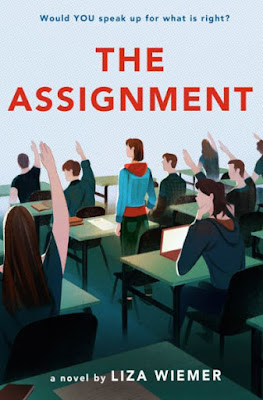 It's senior year for Logan March and Cade Crawford, students at Riviere HS in upstate New York and they are thrilled to be in the same history class with their favorite teacher, popular Mr. Bartley. But they find themselves shocked and appalled when Mr. Bartley gives them a assignment which they find unacceptable. The assignment is to debate the Nazi's Final Solution by researching the Wannsee Conference held on January 20, 1942 during which the fate of Europe's Jews was decided and then taking a side for or against the decision to exterminate all Jews. And rather than having students choose their own position, they are randomly assigned pro or con.

While some of the kids in their class immediately begin to embrace their inner Nazi, Logan and Cade are open and clear about their opposition to the assignment, and they flat out refuse to do it. After speaking with Principal McNeil, they receive an email saying that he and Mr. Bartley would like to meet with them.  Before that happens, Cade and Logan head up to Fort Ontario, where the Safe Haven Museum and Education Center is located. a place known for having harbored 982 Jewish refugees from August 1944 to February 1946. There, Logan and Cade work on an alternative assignment based on this rescue to bring with them when they meet with Principal McNeil and Mr. Bartley.

Although Mr. Bartley agrees to offer their assignment as an alternative for students who feel the way Logan and Cade do, the two friends are still not satisfied. After talking to her father, who tells Logan about an organization called Humanity for Peace and Justice, she and Cade must decide if and how far they are willing to take their opposition to the Wannsee Conference assignment into the public realm.

Although the novel is centered on the assignment to debate the fate of Europe's Jewish population as if the students were Nazis sitting around that table in Wannsee, there is a lot going on. Naturally, an assignment like this would bring out the best and the worst in students, as well as those who have no real opinion, and Wiemer hasn't ignored them. The novel is told from different perspectives, including Principal McNeil and Mr. Bartley, and gives readers some needed insight into the thinking of these different characters, though the majority of the novel is told from the point of view of Logan and Cade.

Neither Logan or Cade are Jewish. I didn't actually find Logan to be a very interesting character except for her passionate stand on the assignment. Her father is a professor, and not terribly available to her, nor are they struggling financially. Cade is much more interesting. His family runs the Lake Ontario Inn and his parents are very dependent on his help to keep things going and it's clear they have money problems. Cade used to be very close to his grandfather before he passed away. He and Cade's grandmother came from Poland before WWII, and before he died, he told Cade about something that happened in Poland that plays strongly into Cade's decision to oppose the assignment.

The Assignment is based on actual events and students, which I remember reading about when it went public. And I remember that my reaction, as a teacher, as someone who wrote a dissertation on an aspect of the Third Reich, and as a human, was that this was not an assignment to give to any student. Yes, teach them about the Holocaust, including the Wannsee Conference, but don't make them take sides in a debate about genocide. And I felt the same way as I read this novel.

At one point, Mr. Bartley shows his class the movie Conspiracy . This was an HBO film from 2001 that re-enacted the Wannsee Conference with several well-known and well-liked actors playing the parts of the Nazis. It's a tough film to watch, and I'm not sure I would show it to high school students, certainly not without a trigger warning.

The Assignment an excellently written book and it will undoubtedly get readers thinking about what they might have done under the same circumstances. And it is definitely a book that will resonate in today's world. While I read, I kept thinking about William Faulkner's line, "The past is never dead. it's not even past." What do you think?

Author Liza Wiemer published an Opinion piece that you might be interested in reading. You can find it HERE

The New York Times recently (September 11, 2020) published an article about the 982 refugees who lived in Fort Ontario in Oswego, NY. You can read it HERE