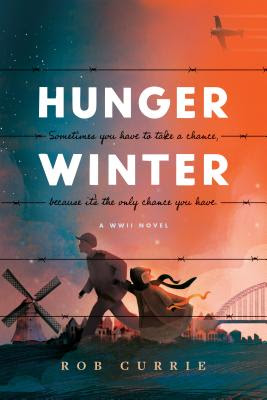 It's 1944 and the Gestapo would like nothing more than to capture Dutch resistance leader Hans Ingelse. So far, Ingelse has managed to avoid capture and continue his resistance activities. But, since his wife had died two months earlier, the Gestapo now  have his three children in their sights. In the middle of the night, on November 11th, a neighbor risks his life to let 13-year-old Dirk Ingelse know that the Gestapo has arrested his older sister Els for her resistance activity, and now, they are on their way to the Ingelse home in Oosterbeek for Dirk and his 6-year-old sister Anna.

Luckily, papa had already begun to teach Dirk what to do in certain situations to avoid capture. Dirk wastes no time getting Anna up and out to begin the trek to their Tante Cora's house in Doorwerth, taking what little food they had. Meanwhile, Els is being held in an interrogation center in downtown Oosterbeek, and it doesn't take long for the torture to begin. The Gestapo is sure Els will break and tell them where her papa is, but she's stronger and more determined than they realize.

Dirk and Anna safely reach Tante Cora's the next day, and feel somewhat safe there, but hungry, since all food is confiscated by the Nazis. And they must still be cautious now that they are in danger of being picked up by the Gestapo. Instead, Dirk and Anna get picked up in a Nazi razzia, a roundup of any able-bodied person to work in munition factories. There, a sergeant decides to give Anna to a friend who had recently lost his daughter, as a replacement. Hearing that, Dirk is determined to escape, but how? The factory is so well guarded. Luckily, on November 22nd, the Allies begin to bomb that part of Holland. As the guards take cover, a bomb hits, giving Dirk and Anna an opportunity to escape - right into a minefield. But, Dirk figures out the path through the field and soon they are on their way to Oma and Opa's farm in Nijmegen. But, before they get there, Anna sprains her ankle, and they need to stop at a farmhouse near Driel. There, they are met by a elderly couple, and a Nazi officer holding them at gunpoint. He claims he wants to turn himself over to the Americans in Nijmegen, but is this just another trick to catch their papa?

Meanwhile, the Gestapo still hasn't gotten Els to talk, so they decide to amp up the torture, transferring her to a Luftwaffe base in Rotterdam on November 26th, just before the Allies dropped bombs on that city.

Will the Ingelse family survive capture and be reunited with papa, if he is even still alive? Now that the Americans have liberated Nijmegen and are pushing forward, the Nazis seem to be getting more and more desperate to capture Hans Ingelse, refusing to acknowledge that the German Reich might actually be losing the war.

Hunger Winter is certainly an action-packed novel, with very appealing characters that readers can root for (well, truth be told, I found Anna very annoying).  Personally, I would have liked a little more about Els, who is my favorite character. There's also a bit of mystery surrounding what has become of the children's father, and that isn't revealed until the end, and it quite a revelation, but readers never really get to know him.

I thought Currie really captured the starvation of the Dutch people due to the lack of food during the winter of 1944-1945. Tante Cora has Dirk dig up the bulbs in the garden for soup, there is a hint about the fate of her stolen dog that might not be caught by younger readers, trading valuables with farmers for food only to have it taken by the Nazis, and of course, collaborating with the Nazis for extra rations.

It did bother me that the Nazi officer Dirk and Anna meet at the farmhouse on their way to Oma and Opa's turns out to be someone their father went to school with. That was just more coincidence than my adult sensibility could accept, but probably not for my nine-year-old self, so I don't think younger middle grade readers will have a problem with it, either.

Back matter includes a section called What Really Happened?, an interview with the author, Rob Currie, Discussion Questions for teachers, and Key World War II Dates for the Netherlands, as well as maps. I read an ARC, with included everything but the maps.

Hunger Winter is a nice work of historical fiction and not many take place in the Netherlands for this age group. If I were teaching a WWII unit, I would pair it with Hilda van Stockum's The Winged Watchman, originally published in 1962, as a nice resistance compare and contrast component.

This book is recommended for readers age 8+
This book was an EARC gratefully received from NetGalley
Posted by Alex at 11:28 AM