In the preface to his autobiographical narrative about surviving Auschwitz, Night, Elie Wiesel wrote that it is the responsibility of witnesses to history to bear witness, that "[s/he] has no right to deprive future generations of a past that belongs to our collective memory." In Night, "[t]he witness has forced himself to testify. For the youth of today, for the children who will be born tomorrow. He does not want his past to become their future." (pg xv)

In Chapter 3 of Night, Elie describes how he and his father had survived the first selection process by which who lives and who dies is immediately decided upon arriving at Auschwitz Birkenau Concentration Camp, and their subsequently witnessing the burning of the bodies of adults and children that same night. As the Jewish men begin to say the Kaddish, the prayer for the dead, Elie wonders where God is in Auschwitz. Elie breaks out of the narrative form and inserts this poem: 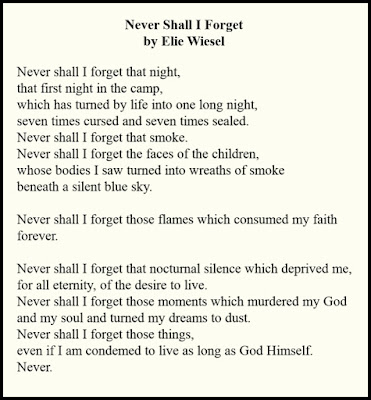 And given some recent events in the world today, where people are again flirting with fascist ideas, remembering the genocide of Jews, Roma, gays, and the disabled committed by men and women eager to blindly support their leader, Adolf Hitler, International Holocaust Remembrance Day reminds us of the importance of not just remembering but also of actively acting against all forms of hate and bias.