On Snowden Mountain by Jeri Watts 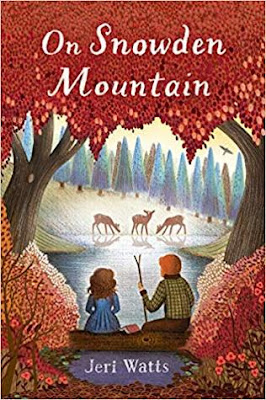 It didn't take long once WWII began for 12-year-old Ellen Hollingsworth's father to join the army and go off to fight Hitler in Europe, leaving his daughter to care for their home and her catatonically depressed mother. Now, it's September 1942 and Ellen has run out of money, food, and the kindness of neighbors. Not knowing what else to do, she writes her dreaded, estranged Aunt Pearl about her circumstances and the next thing Ellen knows is that she and her mother  are on a train out of Baltimore heading to the tiny town of Snowden, Virginia at the foot of the Blue Ridge Mountains, to live with her aunt.

It's a whole new world for Ellen, from the lack of electricity and the outhouse at Aunt Pearl's to the small one room school held in an abandoned church. It's there that she meets Russell Armentrout, a boy of about 15 who seldom shows up at school, who still doesn't know his alphabet, and who always smells like skunk. Ellen and Russell take an instant dislike to each other after he calls her mother crazy.

But when Aunt Pearl sends Ellen to the Armentrout home with a basket of food, she witnesses Russell's home, his "beaten down" mother, who used to be Ellen's mother's best friend, and his abusive father. After this incident, Ellen and Russell begin a tension-filled friendship. But as they begin learn the truths about each others home life, a real friendship develops.

Because her father used the war as an excuse to run away, leaving his daughter and depressed wife behind, I decided to review On Snowden Mountain here. It is not a war story per se, but a home front tale that is definitely influenced by the fact of war.

The main theme of this coming-of-age story is the unfolding of Ellen's growth as a person. Ellen arrives at Snowden a judgmental city girl who believes herself to be above the people there and who is determined not to make any friends. But she is also a girl who is plagued with doubts about reaching out to her aunt for help, who fears that she may be prone to the same kind of depression as her mother, and who is angry at her father for leaving her with his responsibilities. But as she learns about her mother's past and witnesses acts of quiet, unpretentious kindness on Snowden Mountain, and in her exchange of letters with her father, Ellen learns to face her fears, and accept that there are things she just can't change.

Two things really impressed me while I read. First, though downplayed compared to Ellen's story, there are lots of details about Aunt Pearl and the things she does to help provide the community with needed food, much of which she cans herself, and clothing, while still caring for her sister.

Second, as a story about a family in crisis, taken the away from the hustle and bustle of a big city to the much slower moving country, it accentuates the kind of loving patience needed to help Ellen's mother with her severe depression, and undertaken not just by her sister Pearl, but by her old best friend, Hannah Armentrout.

On Snowden Mountain is a short novel that deals with some very serious themes, including family, mental illness, physical and mental abuse, and alcoholism and does it with empathy, and making it is a novel not to be missed.

Thinking about reading this with your class? You can find a useful Discussion Guide courtesy of the publisher, Candlewick Press, HERE