The American Agent (a Maisie Dobbs Mystery #15) by Jacqueline Winspear 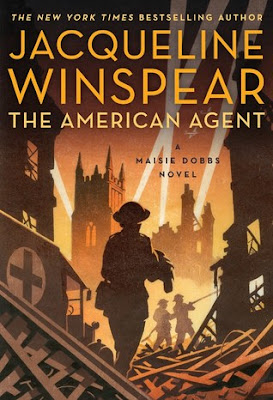 It's September, 1940, and the German Luftwaffe is blitzing bombs down on London nightly. Maisie, who you may recall was a nurse on the battlefields in France during WWI, and her best friend Priscilla Partridge have volunteered to be ambulance drivers, doing what they can night after night to help the injured. One night, a young American journalist, Catherine Saxon, rides along with Maisie and Priscilla. Catherine is writing accounts of the Blitz for Americans and is hoping to become one of "Murrow's Boys" - American reporters based in London, working for Edward R. Murrow on BBC radio.

Unfortunately, the next day, Maisie learns that Catherine Saxon has been murdered and her old friend Robert MacFarlane of Scotland Yard wants Maisie to be part of the investigation to find out who killed her and why. Oh, and he wants Maisie to work with Mark Scott, an American agent attached to the Department of Justice. And yes, if you've been keeping up with Maisie, this is the same Mark Scott with whom she worked and had a bit of a flirtation in Journey to Munich (Maisie Dobbs #12).

The investigation of Catherine Saxon's murder is complicated by a number of things. For one, her father is a wealthy isolationist American senator with whom she never got along and who has cut her off completely for not doing what he wanted her to do - be a wife in an advantageous marriage. And Mark Scott, for all his flirtiness, doesn't really seem interested in solving Catherine Saxon's murder, disappearing and showing up at odd times so that Maisie is left to wonder what he's up to. And, of course, Maisie is still in the midst of trying to adopt her orphaned evacuee Anna, which she would much rather focus on. Anna is still living with Maisie's father and step mother at Chelstone, the family farm, and having meltdowns whenever Maisie needs to return to London. And as if these things aren't bad enough, one night while driving their ambulance, Priscilla is very seriously burned while rescuing some children in a bombed house.

Maisie has a lot of personal stuff to contend with in this novel, but luckily, for all his disappearing during the Catherine Saxon investigation, Mark always reappears just when Maisie needs him to. Could it be that these two are ready to take their previous flirtation to another level? But why can't she discover anything about him? Is he somehow up to no good? What's his connection to Ambassador Joseph Kennedy, also an isolationist and Nazi appeaser? And will her job as an investigator jeopardize her chances of adopting Anna? As Maisie interviews the women in Catherine's life, including her best friend Jennifer Barrington and her husband, is she beginning to look at her own life differently?

Looking at these questions, you can see that this is an intriguing book, and a more personal and introspective one than the last few Maisie Dobbs' novels I've reviewed. In addition, Jacqueline Winspear has really captured just what London was like during the Blitz, with fires all around, lives and homes lost, the smell of fires burning everywhere, buildings sandbagged and barb wired, barrage balloons in the air and "where tension was threaded into the fabric of life" but where "people prided themselves on their ability to carry on as normal." There's even a bit of humor. Whenever the V-formation of Luftwaffe bombers fly over Chelstone, next-door neighbor Mr. Avis "could be seen shaking his fist and shouting at the sky, before aiming his rifle towards the bombers," a gesture nicely summed up by Mark Scott "You know, you've gotta love you Brits."

Winspear includes a Prologue that consists of reports by journalists about London in the days just before and after the Blitz begins on the night of September 7, 1940. This nicely sets the stage for not only Catherine Saxon's murder, but also for what Maisie and all Londoners faced on a nightly basis while carrying on as normally as possible during the day. The inclusion of Edward Murrow and other journalists reporting to Americans about the Blitz, as well as different isolationist politicians, will certainly resonate with today's readers. But in the end, you will be very surprised at 'who done it' and why. I know I was.

The American Agent is definitely my favorite Maisie Dobbs so far and I can't wait for the next adventure.

This book is recommended for readers age 14+
This book was an EARC gratefully received from EdelweissPlus
Posted by Alex at 11:10 AM