Skyward: The Story of Female Pilots in WWII written and illustrated by Sally Deng 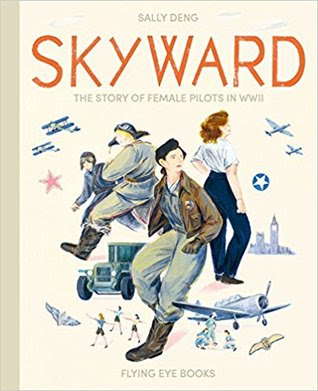 It's 1927 and three girls living in different countries - Hazel, a Chinese American living in San Francisco, Marlene living in the English countryside, and Lilya, living in a small town in Russia - all have the same dream - they want to fly. What could feel more freeing that being up in the heavens in a plane?

As time went by, their dream of flying still very much alive, the girls did learn how to pilot a plane and experience the joy they knew they would find in the air. Marlene learned first with the help of her brother, getting a pilot's license even before she got her driver's license. Encouraged by her father, Hazel took lessons whenever she had the money to pay for them, reading books about the science of flying in between. Lilya's family wanted her to become a doctor not a pilot, so she secretly joined a high school flying club, paying for flight time by working in a factory.

When war broke out in 1939, and men left jobs to fight, women wondered what they could do to help. For Hazel, Marlene, and Lilya, the answer may have been easy, but their respective governments weren't interested in female pilots. At least, not until things began to be desperate. In the US, pilot Jackie Cochran established the Women Airforce Service Pilots (WASP). Hazel and her friend Elizabeth "Bessie" Coleman, an African American pilot, both applied. Hazel was accepted into the WASPs, Bessie was rejected based on her race.

In England, Pauline Gower, the first woman to get a commercial pilot's license, was recruiting women for the Air Transport Auxiliary (ATA). Naturally, Marlene applied but almost didn't get accepted because of something looking wonky during her physical. But in the end, though, Marlene was able to join the ATA.

In Russia, Marina Raskova, the most famous aviatrix in that country, was also recruiting female pilots and Lilya was invited to Moscow for an interview. Lily felt like she was in a dream, until she was accepted into Raskova's program.

The three women spent the war years risking their lives flying for their countries. Deng follows their adventures in WWII, as they perform feats of bravery even as they face of danger,  racism, doubt, misogyny and a general lack of support and encouragement.

This is Sally Deng's debut children's book and she makes it clear from the very beginning that this is a work of creative fiction based on real events and real women. While the character of Hazel might be based on the real Hazel Ying Lee, who did fly for the WASPs in WWII, there is not reason to think that this is a partial biography about her, but rather the author's homage to Hazel and all the other women who flew for their countries in WWII. However, Bessie Coleman, Pauline Gower, Jackie Cochran, and Marina Raskova are not fictional characters.

That being said, I loved this book. The text is simple, straightforward and easy to follow, even as it transitions from one character to another. This is, of course, supported by the illustrations, which are quite simply wonderful. Deng's washed illustrations are done in a palette that is reminiscent of old WWII posters and other illustrations from the time period. They run the gamut of spot illustrations to two page full-color spreads. There are also full pages with spot illustrations that, as you can see below, reflect all three women as they train and relax, despite being separated by thousands of miles, and which serves to move the story along nicely: 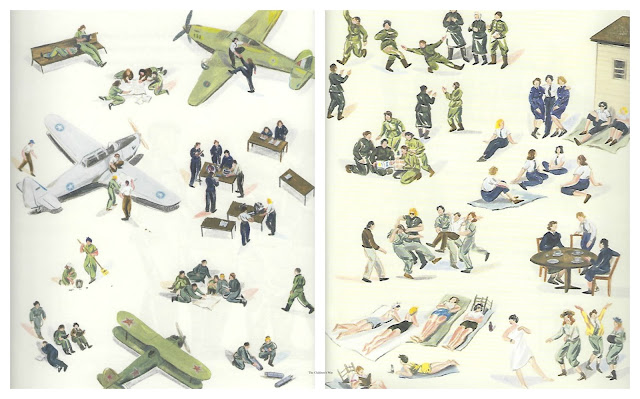 When I ordered this book, I did it sight unseen because it sounded like something I would be interested in, but I didn't really know what to expect. Needless to say, I was not disappointed. It is a thoughtful work of fiction, with beautifully rendered illustrations, that highlights the contributions of women pilots in WWII through three representative characters.

This book is recommended for readers age 9+
This book was purchased for my personal library
Posted by Alex at 12:55 PM