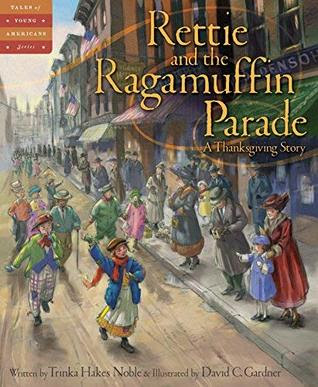 It's Fall 1918 and the kids living on the Lower East Side in NYC are getting excited about the upcoming Ragamuffin Parade, especially Loretta "Rettie" Stanowski, 9. All you need to do to be in the Ragamuffin Parade is to dress up like a beggar, and Rettie certainly has enough ragged clothes to do that, right down to the holes in her shoes.

Being in the Ragamuffin Parade is simple enough, too. All kids have to do is walk down Broadway on Thanksgiving morning and people will toss pennies to them. Of course, it's a scramble to get any pennies, but Rettie really needs to get as many as she can. Her father has been away at war, and her mother has been ill, luckily not with the influenza that is running rampant in Rettie's neighborhood and throughout the rest of the country as well. If her mother gets sick with influenza, Rettie, her two little sisters and baby brother would be sent to live in an orphanage. So, Rettie carefully cares for her sisters and the baby, and now, she would really like to get something special for their Thanksgiving dinner. But what if the Ragamuffin Parade gets cancelled because of the flu epidemic?

Rettie has already been doing everything she can to make a few extra pennies, including washing rags for the rag man. After shopping one day, Rettie finds a health service nurse posting a quarantine sign on the door of Mrs. Klumpenthal, the building manager. Now who would keep the building clean enough to satisfy the Board of Health? Rettie quickly negotiates 25¢ a week to do the work. Luckily, the nurse said Rettie's mother does not have influenza and gives her a tonic to help her get better.

Rettie has a lot on her shoulders, but a few weeks later, her mother begins to feel better thanks to the tonic she took, and finally, on November 11, 1918 come more good news - the war comes to an end. As an act of thankfulness, President Woodrow Wilson declares November 25th as the day the country would celebrate Thanksgiving.

Thanksgiving morning, dressed in her raggedy clothes, Rettie heads to Broadway for the Ragamuffin Parade, collecting enough pennies to buy apples and a pumpkin to go with their dinner of stewed cabbage. As snow falls outside, and a kitten drinks a bowl of milk, Rettie, her mother, her sisters and brother gather together for the first hopeful Thanksgiving in a long time.

Rettie and the Ragamuffin Parade is another entry in the Tales of Young America series (see also Paper Son by Helen Foster James ), presenting a moment in history through the experience of a young protagonist in a picture book for older readers. Each book in the series is informative and well-researched, Through Rettie, young readers can learn about the influenza epidemic that swept the country in 1918, the hardships felt by some families when their breadwinner is away at war, and about life in a tenement neighborhood like the Lower East Side, and how this meant that sometimes kids like Rettie had to do the work of adults despite being so young.

Rettie's family and neighborhood are richly and energetically depicted in David Gardner's wonderfully detailed, full-color water-color and pencil illustrations, capturing the expressions and emotions all the characters, and the crowded, noisy streets of lower Manhattan.

Rettie and the Ragamuffin Parade is a wonderful choice for anyone interested in American history on the local level. It is also an excellent addition to books about Thanksgiving. Be sure to read the Author's Note at the back for more information about the difficulties faced by Rettie and the rest of the country in 1918.

If you ever visit New York City, you might want to travel down to the Lower East Side and visit the Tenement Museum.

FYI:
It seems that most people outside of NYC have never heard of the Ragamuffin Parade on the Lower East Side, or in any of the other boroughs, and in fact, my NYC-born Kiddo never has either. I remember learning about it in 4th grade when we studied NYC history and we were taught that it was the precursor to both the Thanksgiving Day Parade that we know today, and to Halloween Trick or Treating, not something that was really popular until after WWII.

Noble includes this photo in her Author's Note. If you look closely, you'll notice that some of the kids are wearing masks. This was not uncommon, cheap masks were sold for the Ragamuffin Parade in candy stores. Because of that, the Ragamuffin Paraders are sometimes referred to as Thanksgiving Maskers, but the goal is the same - to beg for money (in fact, you might recall that the Ragamuffin Parade is mentioned in the book A Tree Grows in Brooklyn by Betty Smith:

"Most children brought up in Brooklyn before the First World War remember Thanksgiving Day there with a peculiar tenderness. It was the day children went around "ragamuffin" or "slamming gates," wearing costumes topped off by a penny mask."

You can find out more about the Ragamuffin Parade tradition HERE
Posted by Alex at 11:59 AM