The Faithful Spy: Dietrich Bonhoeffer and the Plot to Kill Hitler written and illustrated by John Hendrix 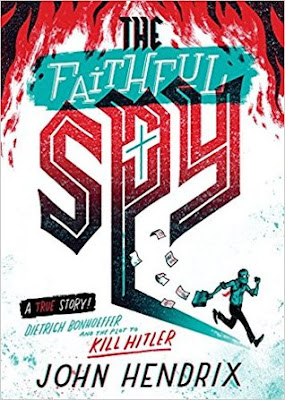 In its starred review, Kirkus calls The Faithful Spy an audacious graphic biography and it certainly is that. But then again, it is about a man whose whole being centered around theology and his own religious beliefs at a time when these beliefs were about to be sorely tested. Illustrated in bold teal, red, and black against black, white, teal or red backgrounds, this is equally a story about Adolf Hitler's seizure of power and of the rise of the German resistance.

Twins Sabine and Dietrich Bonhoeffer were born in Berlin, Germany 1906, second to last children in a large Lutheran family, one drawn more to science than theology. Dietrich, however, developed an interest in theology early in life, but felt that something was missing from the church he loved so much. He realized that something was causing it to feel static, to feel like just an academic exercise, and after a trip to Rome, he began struggling to discover how he could change that and make the church dynamic.

In 1930, Dietrich left Germany to study at Union Theological Seminary in New York City. There he met Frank Fisher, an African American and Jean Lasserre, a Frenchman. When Fisher took him to the Abyssinian Baptist Church, where a surprised Bonhoeffer saw the energy of the people at worship, heard them encouraged to act against the world's injustices, and to put their faith in God in opposition to the world's evils by their pastor, Rev. Adam Clayton Powell. From Lasserre, Bonhoeffer leaned that the church should be independent of the state, and should exist to help and serve the people, not to tell them what to do. After a year in NYC. Bonhoeffer returned to Germany, shortly before Hitler seized power.

Hendrix parallels Bonhoeffer's changing ideas about the church with Hitler's rise to power. Both have compelling stories that are made all the more interesting because they are such polar opposites. But, there is no lesson to be learned from Hitler's story, and everything to be gained from Bonhoeffer's. And Hendrix makes it a point to focus on Bonhoeffer's faith and his developing belief that the church required the faithful to act against injustice. Bonhoeffer joined the resistance, where he was able to serve as a double agent, reporting to Hitler's Reich and at the same time, gathering information for the resistance. When the plot to assassinate Hitler finaly became a reality, Bonfoeffer faced his greatest struggle between behaving morally as his religion ordained or acting against those moral principles by taking a life. He found his answer in Martin Luther to sin boldly: 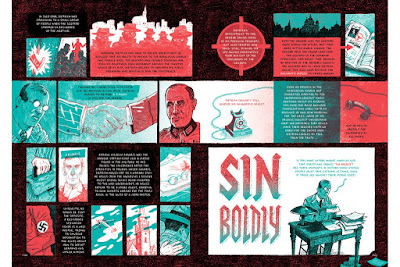 Using only a three color graphic design, Hendrix has created a dynamic format with which to tell Dietrich Bonhoeffer's story. This is not a panel by panel work, but one that incorporates  a variety of layouts, nor is it a strict biography, there's plenty of text and allegorical illustrations used throughout to emphasize or illustrate a particular point: 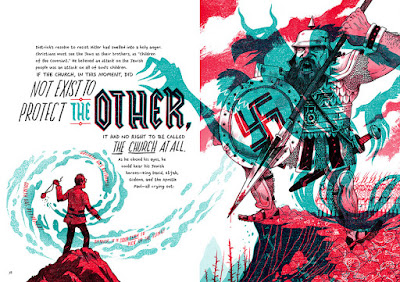 The text is handwritten, and small, and affords plenty of information to be included on each page. There are some maps, and the allegorical illustrations have the feel of a good political cartoon. The whole book has the feel of old comic books from that time period, which somehow gives it a nice sense of authenticity. I wondered if this would make it more or less attractive to kids given how glitzy comics are today. Hopefully, the excellent visuals and compelling subject matter will pull them in. What I found most interesting is its relevance for today's world.

Be sure to read Hendrix' Authors Note at the back of the book, along with the other informative back matter.

The Faithful Spy is a book that will have such widespread appeal to readers, artists, comic book lovers, historical scholars, and everyone else and I can't recommend it more.

This book is recommended for readers age 10+
This book was purchased for my personal library
Posted by Alex at 11:42 AM