Baseball Saved Us by Ken Mochizuki, illustrated by Dom Lee 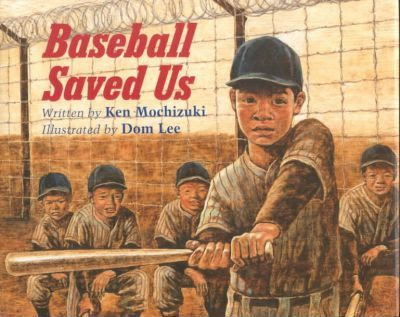 When Baseball Saved Us was published 25 years ago, it was described by reviewers as being about an important but neglected part of American history. Well, times have changed and more books for children about the internment of Japanese Americans during WWII have been written about this shameful period in our country's history. Yet, Baseball Saved Us is as important a book today as it was when it was first published.

The story is told in the first person by a young boy in an unnamed internment camp, whose father has decided to make a baseball field in the desert where the camp is located to give people something to do. Not particularly excited about that, the boy recalls that in school before being order to leave his home with his family, he was never picked to play on any sports teams when the other kids were choosing sides because of he was so much shorter and smaller that the other kids.

Everyone pulls together and soon the baseball field is finished, mattress ticking is turned into uniforms, teams are forms and it's time to play ball. Playing on one of these teams is easier for the boy because the other kids were pretty much the same size, but it didn't really help his game much.

During one game, he notices that the soldier in the guardhouse is watching him. Taking a few practice swings, the boy puts all his resentment and anger into his next swing, and sure enough, he made his first home run.

After the war, when the Japanese Americans who were held in internment camps are finally released and allowed to return home, the narrator finds himself once again alone at school. But when baseball season comes around, this time he proves himself a pretty good player, earning the nickname "Shorty." At a game, when it's his turn at bat, Shorty can hear the crowd screaming and calling him names. Thinking about the guard in the watchtower and how he took his anger out on the bat, Shorty once again calls on the feeling as the crowd jeers him and putting it all into his swing, sends the ball over the fence, saving the day for his team: 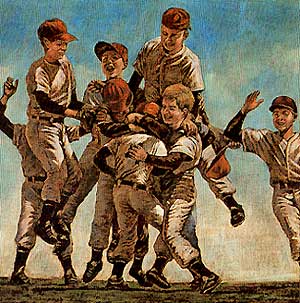 Of course, this isn't really a story about baseball, but it is one about racism and offers a constructive way of dealing with feelings of anger and resentment, while gaining a sense of dignity and self-respect. It's interesting that the narrator has no name until the boys at school after the war give him a nickname. It's as though he had lost his identity until he began believing in himself.

Baseball Saved Us is not just a good story with an important message. It is also a good book for introducing the whole history of Japanese American internment to young readers without overwhelming them. In the course of the story, Shorty says that he was taken out of school by his parents one day, and that his family soon found themselves living in horse stalls before moving to the camp in the desert, where they were subjected to dust storms and sand everywhere. He also points out that people were forced to lived in barracks without walls, to wait in line to eat or to use the bathroom, where there was no privacy. His older brother ate with his friends, but soon was refusing to do what his parents requested - a big problem with older kids in the internment camps. This offers a wonderful opportunity to expand on how people perceived to be an enemy of the United States can be treated so badly.

Supporting Shorty's narration and done in somber shades of brown and tan with splashes of color, Dom Lee's realistically detailed illustrations really bring this story, that has its roots in the author's parent's internment experiences, to life.

This is a book that many kids will find resonates in today's world even though it was written 25 years ago about the racism and prejudice that was so prevalent in WWII more than 70 years ago.