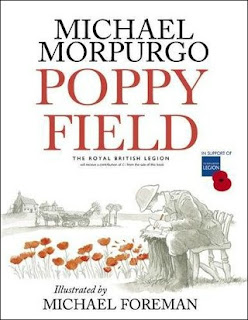 Today is Veterans' Day in the United States and Remembrance Day for the rest of the world. And while it is important to honor and say thank you to those who serve and have served in the armed forces, today is even more special. It is the 100th Anniversary of the Armistice that ended the Great War, or World War I as it later came to be called.

No one had ever experienced a war like WWI before. New weapons were developed that had devastating results on both soldiers and civilians. From the air, planes could now drop bombs on battlefields and cities; at sea, submarines could now torpedo battleships and cargo ships carrying food and supplies; and on the battlefield, tanks with machine guns and canons could roll over no man's land and attack their enemies in the trenches, while chemical weapons like chlorine, mustard gas and flamethrowers were also used in trench warfare. It's no wonder so many returned suffering from PTSD.

To commemorate the 100th Anniversary of Armistice Day, Michael Morpurgo has written a lovely book that tells a fictionalized story of how and why the poppy have became the flower that symbolizes the sacrifices made by those who have fought in their country's wars.

Young Martens Merkel lives on a farm in Flanders near Ypres in Belgium with his mother and grandfather. The farm, once part of No Man's Land in WWI, is in the middle of a vast poppy field and surrounded by several cemeteries. Sadly, Martens father was killed while plowing one of his fields by an unexploded shell. There is also a part of a poem written on an old wrinkled paper, framed and hanging on the hallway wall in the Merkel home. It is the beginning of a poem and Martens loves to hear his grandfather tell the story connected to that poem.

When Martens' grandfather's mother Marie was an eight year old girl, she used to sell eggs at a field hospital to the English soldiers. In the spring of 1915, the poppies were in bloom and Marie would pick some to give to those who bought her eggs. One morning, there weren't many soldiers to buy eggs, but Marie noticed one sitting nearby, writing in a notebook. Irritated at her for interrupting him, he threw the now scrunched paper he had been writing on away, but he asked Marie if she would place her poppies on the grave of his best friend, Lieutenant Alexis Helmer, who had been killed the day before and who loved poppies. The poppies immediately began to blow away, but the soldier didn't seem to mind and began writing again - a poem dedicated to his friend.

Marie's mother read and translated what was on the paper she kept, and the whole family agreed that the words were too precious to throw away. Her father made a frame and hung it on the wall. The 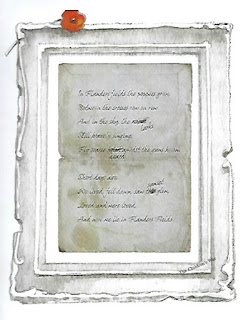 poem is, of course, In Flanders Fields by John McCrea, a Canadian surgeon and Lieutenant-Colonel.

There is much more to the story Martens' grandfather tells, which becomes a nice blending of the fictional Merkel family history and some factual wartime history, including war's aftermath. Michael Morpurgo has a wonderful ability to take real events and write a story around them that works perfectly for young readers, entertaining and informing at that same time. Here, he says in an interview, he wanted kids to understand why it is important to remember those who fought in a long ago war by bringing it into the present, as well as showing the impact war has on civilians. And he has done an outstanding job of that with Poppy Field.

The 100th anniversary of the end of the World War I is perfect timing, since it has been in the news so much this weekend and kids can witness world leaders acknowledging the men and women who served their country, and who gave their lives then, just as they do now.

Be sure to read the Afterword for more information on the history of In Flanders Fields, John McCrea, and how the poppy became the symbol of remembrance.

This book is recommended for readers age 9+
This book was purchased from Book Depository for my personal library.

Don't forget in all the commemorations, however, that this is also Veterans' Day in the US and
remember the thank all veterans for their service.