Whistling in the Dark by Shirley Hughes 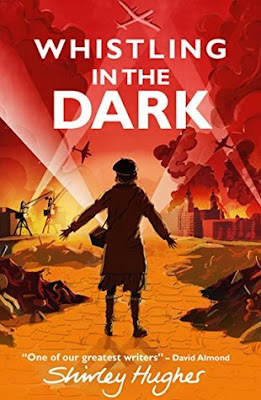 It's autumn 1940, and for Joan Armitage, 13, and her family - mom, older sister Audrey, brother Brian and 6 year old Judy - living in a suburb of Liverpool, getting by has been hard ever since her dad's Merchant Navy ship was torpoeded by a Nazi U-boat in the Atlantic.

Now, WW(( is in full swing and the house is always cold, curfews have been imposed, there are nighttime air raids and everyone is always hungry because of rationing.  On top of that, a new man, Captain Ronnie Harper Jones, part of the Army Catering Corps stationed near Liverpool, seems interested in mom.  Despite the occassional box of goodies he brings the Armitage family, Joan, her brother and her sister don't like him much,  though Judy does, or rather,  she like the sweets he brings her.

Ironically, though, life is pretty boring despite the war.  Luckily, Joan has a best friend, wealthy Doreen, and both girls love going to the Queensway Cinema to see American movies.  And of course, there is the Saturday morning salvage collection Joan does with friends Ross and Derek.  Best of all, there is her art - drawing and painting are her escape and her passion.

But as autumn passes, the air raids begin to intensify, as the Luftwaffe steps up their bombings over Liverpool.  Even the Queensway becomes too dangerous to go to.  And after hearing about an army deserter who is believed to be in the area, Joan wonders if it is the unknown man she saw staring into the house one night while closing the blackout curtains.  She is shaken, but decides not to say anything and when it doesn't happen again, it gets forgotten amidst rumors of food being stolen and sold on the black market.

At school, the class bully Angela and her gang seem to enjoy picking on Ania, a Polish refugee who arrived in England on the Kindertransport.  When Joan's mom tells her to invite Ania for tea, the normally quiet, shy girl opens up to Joan about what happened to her and her family in Poland.

When Joan is confronted by the mysterious man once again, on her way home one night, one mystery may be solved, but it only leads to the possiblity of more grief.  How is he connected to Ania and what does he want from her?  At the same time, the rumors of the stolen food and black market dealings prove to be true and the outcome is devasting for Joan's family, the communtiy and even her best friend Doreen.

This is the second WWII novel Shirley Hugnes has written.  Her first was Hero on a Bicycle, also a coming of age story that didn't grab my interest quite as much as this on did.  I found this one to be well plotted, with some nice foreshadowing but also some nice surprises.

"Wartime, when it was not frightening, could be very boring" writes Shirtley Hughes in her Author's Note.  And she has done an exceptional job of depicting the boredom of war without making it boring for the reader. The result is an eye-opening look at daily life on the English home front.  Of course, she knows what she is talking about, since much of the book is based on her own 13 year old experiences living in Merseyside during WWII.

One of the interesting aspects of Whistling in the Dark, is how much readers learn about the Merchant Navy, those men who sailed to the US and Canada to bring food and other supplies back to England on unarmed but very vulnerable ships.  Joan's father and Audrey's boyfriend Dai both are part of the Merchant Navy, the real heroes of this story, according to Hughes and the Liverpool docks play an important role in this novel.

When most of us think of the Blitz, we have a picture of hundrends of Luftwaffe planes flying over London, dropping their bombs, bringing death and the destruction of homes, churches, monuments, and institutions.  But the Nazis targeted more than London, including a terrible Blitz over Liverpool from August 28, 1940 to the end of December, the timeframe of Whistling in the Dark, doing incredible damage to the all important docks there.

Whistling in the Dark is a novel that will appeal to young readers interested in historical fiction, coming of age stories and mysteries, as well as fans of Carrie's War by Nina Bawden and Good Night, Mr. Tom by Michelle Magorian

This novel is recommended for readers age 9+
This book was purchased for my personal library
Posted by Alex at 7:50 AM