The Holocaust: Racism and Genocide in World War II (an Inquire & Investigate Book) by Carla Mooney, illustrated by Tom Casteel 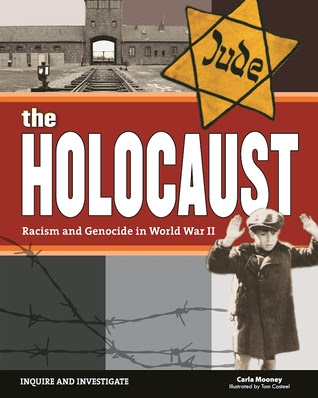 This history of the Holocaust is such a complicated, often confusing history that teaching it can be difficult - especially to upper elementary/middle school students. Most students have read novels that take place during World War II and the Holocaust, and while they certainly help to explain things, teaching the facts can still be difficult. How do you reckon the intentional destruction of 11 million people, including the attempted extermination of the entire Jewish race, 6 million of whom did indeed die at the hand of the Nazis, with the desire of one man bent on achieving his own ends of creating a master race.

To help students and teachers understand the Holocaust better, Carla Mooney, who has written over 70 books for kids and teens covering science, social studies, and current events, has written a book to help readers learn about the Holocaust. In Chapter One, she begins with a brief, but detailed history of anti-Semitism, a history that began over 2000 years ago when the Romans exiled that Jews after defeating them and taking over their land in the Middle East, then brings the reader through the Enlightenment, the Great War and finally to the rise of Adolf Hitler and his Nazi party.

Chapter Two traces the rise of the Nazi party, the use of propaganda to sway the German people, the early treatment of Jews, the Nuremberg Laws, and finally the violence of Kristallnacht, including the destruction of Jewish businesses and homes, the arrest of Jewish men, and the killing of other Jews.

Chapter Three details the occupation of different European countries by the Nazis, increased persecution of Jews, the different ghettos Jews were forced to live in until they were ultimately liquidated and the Jews sent "east" to concentration camps.

Chapter Four looks at the Final Solution and the different, inhumane ways the Nazis used for eliminating Jews, including mobile killing squads, slave labor camps, and finally the creation of extermination camps, some capable of killing as many a 6,000 people a day.

Chapter Five covers the end of the war, the liberation of concentration camps and the humanitarian crisis that followed, including the large number of displaced persons.

Chapter Six asks the question how could the Holocaust happen? And there are lots of reasons for it, beginning with the fact that other countries simple did not want to offer refuge to Jewish refugees by increasing their limits on immigration, as well as countries that collaborated with the Nazis.

Chapter Seven looks at the ways people found to resist the Nazis and save some Jews, including children, and Chapter Eight look at the legacy of the Holocaust.

So what makes this book different? The Holocaust: Racism and Genocide in World War II is not a book where the student passively receives information. This is an interactive book that helps readers understand the Holocaust using the Inquire and Investigate section found at the end of each chapter. Students are taught the use and value of primary sources, and there are activities for them that pertains to the particular chapters being studied. Here, for example, are the activity pages found at the end of the Introduction: 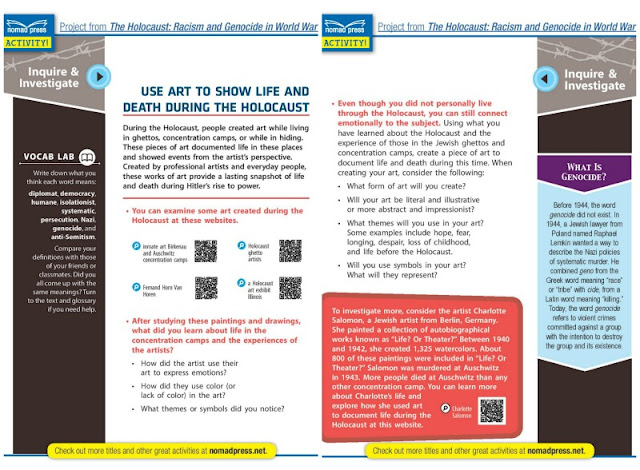 In addition to being interactive, you will also find sidebars that give more details, including Vocab Labs, Bear Witness sections, and key questions. There is also a detailed timeline, copious photographs and illustrations, a Glossary and a list of Sources. For students who can't used the QR code scans, there is a list at the back of the book of the websites used.

If you are a teacher or a student, or just have an interest in finding out more about the Holocaust, I can't recommend this book highly enough.

This book is recommended for readers age 11+
This book was provided to me by the publisher, Nomad Press
Posted by Alex at 10:38 PM