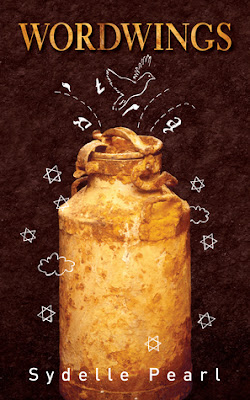 It’s January 1941 and Rivke Rosenfeld, 12, is living in the small sanctuary of a synagogue within the walls of the Warsaw Ghetto with her younger sisters, Tsipoyre and Sorele. Both their parents and their Bubbie (grandmother) have died of typhus, and now they are cared for by their Zadye, their grandfather.

Despite the cold, and secretly at night, while everyone is sleeping, Rivke is moved to begin recording what life for the Jews in the Ghetto is like at the hands of the Nazis. It is a risky thing to do, and she knows full well she could be killed on the spot if such a record were ever found. Yet, Rivke is propelled to take this risk after witnessing German soldiers cruelly shaving off Zayde’s beard with a knife, and then attacking other Jews in the street, including the man Rivke calls the Peddler of Wind.  Rivke begins keeping her diary in the margins of a book of Hans Christian Anderson stories given to her by Batya, the children’s librarian in the Ghetto, stories that Rivke loves.

One day, Rivke asks the Peddler of Wind what he carries in the sack he always has with him. He answers wind wishes, and just as she asks if he has any fairytale wind, there is a strong wind begins to blow. Scared, Sorele begins to cry, and Rivke starts telling a story of her own about a young Polish boy who loved to blow the Shofar on RoshHaShanah. By the end of the story, everyone is spellbound, and it is clear the Rivke, a lover of stories, has found her own voice as a storyteller.

The story, one of hope, becomes known among the Jews in the Ghetto as the “The Jewish Geese.”
Batya, who has already recruited Rivke to help with the secret children’s library, introduces her to Dr. Emanuel Ringelbaum. Feeling her story is too important to lose, he has Rivke write it down. Later, it
is made into a book for the library, with illustrations by Gela Seksztajn, an artist who works with and draws picture of the children in the Ghetto. Rivke learns that Dr. Ringelbaum is head of a secret project called the Warsaw Ghetto Archive, intended to be a collection of artifacts about what is happening in the Ghetto, and which will ultimately be buried for safe keeping until the war is over.


Wordwings is one of those books that is going to stay with me for a long time because there is so much in it to to think about. One the one hand, Rivke’s story is a factual accounting of what life was like in the Warsaw Ghetto - the starvation, the disease, the fear, the inhuman treatment of Jews by the Nazis, but it is also about the importance of family, hope in the midst of despair, the secret kitchen at Nowolipki 68 serving food smugglers have brought in, underground resistance to Nazi oppressors, and the power that stories have to help get us through difficult times. Or, as Rivke says, “…if you let your heart listen to the stories, then their magic will bring a light to your eyes and energy to your step. And pretend bread is better than no bread at all.” (pg 110)

And the fact is that within the Ghetto, and as terrible as conditions were, a cultural life did thrive for the people who were forced to live there. That is made clear in Wordwings with the inclusion of Rivke’s storytelling, Batya’s library, and Dr. Ringelbaum’s Archive, both of which really existed.

One of the things I liked is the way Pearl has so seamlessly combined fiction and reality. Those Rivke, her sisters and Zadye are fictional characters, they continually interact with people like Batya, Gela, Dr. Janusz Korczak who ran the Orphans Home, and Dr. Ringelbaum. When you read the Author’s Note at the end of the book, you will learn more about the persons included included in the novel and their fate.

Wordwings is written completely from Rivke’s point of view in the first person (after all, it is her diary), and her diary runs from 9 January 1941 to 9 May 1941. The ending may feel a bit abrupt, until you remember that the diary ends, not because of anything historical happening, but because Rivke has reached the end of the Hans Christian Anderson book, and it was time to put it into the Archive.

I highly recommend Wordwings to anyone interested in the Holocaust, WWII, or simply historical fiction. It is a valuable addition to the literature of the Holocaust, and has been named a Notable Book for Older Readers by the 2018 Sydney Taylor Book Award Committee.

This book is recommended for readers age 13+
I wish to thank Sydelle Pearl and Guernica Editions for providing me with a review copy of this book.

You can learn more about the Warsaw Ghetto at the Jewish Virtual Library.

You can discover more about Dr. Ringelbaum and the archive by visiting the online Yad Vashem exhibit about it.

Besides Hans Christian Anderson, Yiddish storyteller I. L. Peretz is also mentioned, and you can find out more about him at the Jewish Virtual Library

I was sorry I didn’t pay more attention to the places Rivke mentions in Wordwings, but you may want to do that. If so, here is a useful street map of the Warsaw Ghetto:
(FYI: the Warsaw Ghetto existed from October 31, 1940 to September 21, 1942, the final day of deportations to Treblinka, and also Yom Kippur).