Seized by the Sun: The Life and Disappearance of World War II Pilot Gertrude Tompkins by James W. Ure 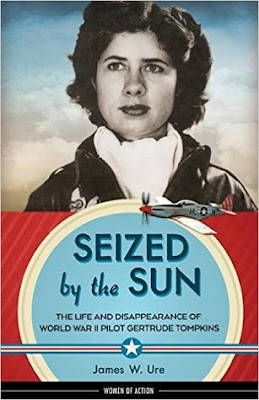 It would seem that having been born in to a well-to-do New Jersey family, Gertrude Tompkins’ life should have been a happy one, free from care and stress. The third daughter of Vreeland and Laura Tompkins, right from the start, Gertrude stuttered just like her father. Vreeland dragged her to doctors throughout her childhood, trying all kinds of supposed cures for stuttering, and naturally, none worked except to make Gertrude miserable. School was especially difficult for her, and she made up excuses not to go whenever possible, finding solace in books and reading instead.

After high school, Gertrude attended the Pennsylvania School of Horticulture for Women, where, though still feeling like an outsider, she found more acceptance than she had in her earlier school days. After graduating, Gertrude traveled abroad extensively, but returning home found herself feeling closed in and eventually moved into her own place in Greenwich Village, commuting to work in her father’s company in New Jersey everyday.

During that time, Gertrude met Mike Kolendorski, a pilot in Eagle Squadron 71, and it was most likely Mike who introduced her to flying. After he left to fly for England, she began taking flying lessons, so when the United States entered WWII in 1941, and Gertrude learned that women pilots were needed to replace men now in service, she put in her application to become a part of the newly formed WASPs (Women’s Airforce Service Pilots).

It is speculated that Mike Kolendorski was the love of Gertrude’s life, but even her sister Elizabeth didn’t know for certain that this was true (Kolendorski was killed on a flying mission in 1941). Interviews with Gertrude’s fellow WASPs and friends yielded some information, and it was made very clear that she loved flying.

At this point, the book not only explores Gertrude’s life in the WASPs, but also gives an in-depth history of how the WASPs began and it troubled existence. Gertrude was apparently a very private person, considering how little is known about her life.

The book does do a great job of piecing together the life of Gertrude Tompkins. She apparently was a very private person, considering how little is known about her life, even by her sisters. It also does a great job giving a detailed account of the WASP and especially the poor treatment the women received from the men pilots and those in charge. There simply were no benefits for these courageous women who put their lives on the line in service to their country. They were forced to pay for everything they needed, while men were provided for, and they were also used to fly planes dragging a banner that was used for target practice with live ammunition and no health, medical, or death benefits if they are hurt or killed. Still, Gertrude and her fellow WASPs loved flying.

As the war began to turn in favor of the allies, and it looked like the end was coming, Ure speculates the Gertrude must have wondered what she was going to do afterwards. When a marriage proposal came from an old friend, Henry Silver, she reluctantly and unhappily accepted, mainly to please her father. Not long after, Gertrude disappeared shortly before taking off in a plane near Santa Monica Bay, California. Neither she nor her plane were ever found and what happened remains a mystery to this day.

I’ve read a number of fictional accounts of women who were WASPs during the war, (Flygirl, Velva Jean Learns to Fly, and Becoming Clementine) and I found that these fictional accounts about life as a female pilot corresponded really well with Ure’s factual information. I also thought he did a great job describing Gertrude’s life, though there was a lot of speculation wherever there were gaps. A number of searches for Gertrude have taken place, but to no avail and Ure theorizes on the possibilities of why nothing was ever found.

Do read Ure’s Afterword to discover how the book was put together. Additional back matter includes a list of Gertrude’s personal effects found in various footlockers and quarters, a Tribute to WASPs Killed in Service, detailed Notes, and an extensive Bibliography.