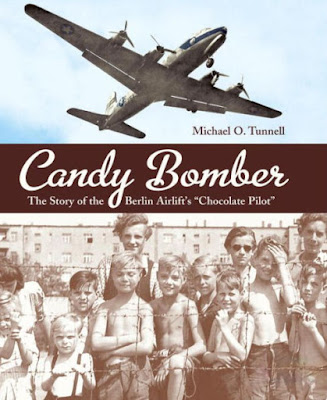 When I was young, I thought that when a war ended, everything simply went back to being normal. Then my dad took me to England and Wales to meet his family and, even after all those years since WWII had ended, there were still so many places where you could see war damage. That trip changed my whole perspective on war, as I realized that recovery was just not that easy.

Nowhere is the aftermath of war more telling and poignant than in the story of the Candy Bomber and the Berlin Airlift. In Candy Bomber, Michael Tunnell gives a brief, but excellent accounting of events that led to the Berlin Airlift. After WWII had ended, Germany was divided up into four occupied zones. Berlin, which suffered heavy bombing towards the end of the war, was right in the middle of the Soviet zone, and was divided in half - the eastern half was occupied by the Soviets, the western half of Berlin was occupied by the Allied powers.

The Soviets, in an effort to drive the western powers out of their half of Berlin, cut off supply routes for desperately needed shipments of food. To keep western Berliners from starving, the RAF launched Operation Plainfare, while the Americans began Operation Vittles in 1948. One of the American pilots who flew foodstuffs to Tempelhof Central Airport in Berlin was Lt. Gail Halvorsen, whose life was changed during one of his deliveries thanks to two sticks of Doublemint gum.

There were always groups of kids around the fence of the airport whenever Halvorsen landed, and one day he walked over to them. A few knew snatches of English, and told him what their life was like. Before leaving, he pulled two sticks of gum from his pocket, broke them in half and gave them to some to the kids. Realizing that the kids probably hadn't had any sweets in a long, long, time, if ever, Halvorsen decided to try dropping candy from his plane. But with so many planes landing in Tempelhof, how would the children know his plane? The answer was simple - he would wiggle his wings for them.

It wasn't long before Halvorsen became known to Berlin children as Oncle Wackelflügel (Uncle Wiggly Wings) or der Schokoladen-flieger, as kids anxiously awaited his candy drops. Pretty soon, his buddies began donating their own sweet rations, and as more parachutes were dropped, Halvorsen's simple plan just kept growing. Soon, donations of candy from around the world began arriving at the Rhein-Main Air Force Base, where he was stationed. Then, the whole operation was nicknamed Operation Little Vittles and Lt. Gail Halvorsen was catapulted into fame as a media figure.

Tunnell has put together a comprehensive biography of both Gail Halvorsen and the Berlin Airlift, incorporating anecdotes of kids who had received candy, letters and drawings Halvorsen received from kids during the airlift, and lots of photographs, attesting to his fame during and after the airlift. There are also maps to half kids understand how things evolved after the war, showing the odd way Germany and Berlin were divided up.

The story of Candy Bomber Gail Halvorsen was a little remembered story, but one that certainly should appeal to young readers. At a time when heroes are really needed, I couldn't help but think about what a wonderful role model Halversen is, demonstrating how one person can make such a difference in the lives of people. And adding to this touching story is the fact that 2018 marks the 70th anniversary of the Berlin Airlift.