Rosie the Riveter by Christine Petersen

I am pleased to be hosting the Nonfiction Monday Round-up this week! If you would like to participate, please leave a comment below including the title of the book you are reviewing, the name of your blog and a link to the post, and I will add links throughout the day. 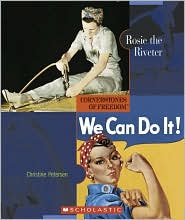 In December, I wrote about the death of Geraldine Hoff Doyle, whose photograph served as the prototype for Rosie the Riveter. Rosie immediately became a well-known figure for the country’s campaign to recruit women into the labor force during World War II. But women did so much more than riveting and Christine Petersen’s book Rosie the Riveter does much in explaining to young readers just what their great grandmother’s might have done outside the home to help the war effort.
The book begins with a brief history of women’s participation in past wars, including Revolutionary War, the Civil War and World War I, as well as the prevailing attitudes that women’s place is in the home.

It then goes on to give a short account of Hitler’s rise to power and the actions he took that eventually led to another World War. This is followed by a description of how the United States entered the Second World War.

With so many men being drafted or enlisting, a labor shortage was created. Yet, employers were as reluctant to hire women as women were to seek jobs outside the home.

As factories were converted for defense, machinery was rebuilt to accommodate women and assembly line production methods instituted. Then the government launched an all-out propaganda campaign to tempt women to fill these new, sometimes dangerous jobs in ordnance work making military supplies, such as bombs and ammunition. And so the image of Rosie was created:

Women, as Ms. Petersen points out, did more than factory work. Some of the other jobs women held were as lumberjacks, miners, and fire fighters, while others worked on farms in the land army. And they also did volunteer work, like Civil Air Patrol, working nights, watching for enemy aircraft

Sadly, as needed as home front workers were, many minorities, for example, African-Americans, were usually overlooked for these positions. In 1941, under threat of a huge protest, restrictions were somewhat lifted and some people of color were hired for defense jobs.

﻿
﻿ Ms Petersen also covers hardships faced on the home front, including the difficulties of rationing and handling a home and a job at the same time. And she points out women’s contribution in the armed services and the kind of progress they made there.

Included at the back of the book is a glossary of unfamiliar terms, followed by a timeline of women’s war time contributions, and recommendations for further information.

Rosie the Riveter is wonderful book for introducing Women’s History Month and the work women did during World War II to younger readers. The book is written very clearly, with words in bold print that be found in the glossary. In addition, there are lots of pictures showing women in the different jobs covered, along with pertinent sidebars. For a small book, it is packed with useful, relevant information and I would highly recommend it for pleasure or classroom reading.

Until I read this book, I didn’t know there was a Rosie the Riveter/World War II Home Front National Park in Richmond, California. More information about this may be found at http://www.rosietheriveter.org/


Christine Petersen is not only a writer of books for young readers; she is an environmental educator and naturalist. More information can be found about her and the work she does at her website Christine Petersen


Rosie even has her own song, hear it here:


This book is recommended for ages 9-12.
This book was borrowed from the NYPL’s Children’s Center at 42nd Street, NYC.
For more book reviews on Women’s History Month, why not visit Kidlit Celebrates Women's History

Lisa over at shelf-employed has a review on a great new baseball book called the Unforgetable Season: the Story of Joe DiMaggio, Ted Williams and the Record-Setting Sumer of '41.

Shirley at Simply Science has a review on a book called Elephant Talk by Anne Downer.

You can find a review by Amanda at A Patchwork of Books on a book called What to Expect When You're Expecting Larvae: A Guide for Insect Parents.

Over at Books, Dogs, and Frogs you can find some books about going to school around the world.

Anastasia at Picture Book of the Day has a post on a book called Gold! Gold from the American River!: January 24, 1848: The Day the Gold Rush Began by Don Brown.

Jeff at NC Teacher Stuff has a review on Dragons by Charlotte Guillain, which he says is a good early reader.

Mary Ann over at Great Kids Books has a review on a book full of good projects called This Book Made Me Do It.

Lori at Lori Calabrese Writes has a post on a book that tells how to preserve our history called How the Sphinx Got To The Museum.

A review of a backlist tile called Face to Face with Dolphins may be found over at MotherReader.

Carrie at Carrie's Comfy Cozy Reading Nook has a book called Ballet for Martha: Making Appalachian by Jan Greenburg and Sandra Jordan along with a video preview.

Racing car legend Louise Smith is featured in a picture book called Fearless, reviewed by Jeanne at True Tales and a Cherry on Top for Women's History Month.

Maclibrary at Check It Out reviews Ten Birds by Cybele Young.

Catherine has a review called Spring has Spring, a review of five Spring books for young readers at The Cath in the Hat.

At Biblio File, Jennie has a post on Yummy: The Last Days of a Southside Shorty by G. Neri.
And Jennifer at Jean Little Library takes a look at Snow Leapards by Erika Shores today.

Meanwhile, Tammy at Apples with Many Seeds reviews One Well: the story of water on Earth by Rochelle Strauss in honor of World Water Day tomorrow.

Rasco from RIF features a review on a book about my favorite city called ABC NYC: A book about SEEING New York City by Joanne Dugan.

Roberta at Wrapped in Foil offers a review on another Women's History Month book called Wheels of Change: How Women Rode the Bicyle to Freedom by Sue Macy.

Pink Me takes a look at Celebritrees: Historic and Famous Trees of the World by Margi Preus.

Over at Bookends you can find a review on Sports Illustrated Kids All Access, a book that gives a behind the scenes look at sports.

Janet at All About the Book with Janet Squires also has reviewed a book about sports called Athletes with Disabilities by Deborah Kent.

Brenda at Proseandkahn has written a post on a book called Arctic Lights: Arctic Nights by Debbie S. Miller in honor of the vernal equinox.

And Heidi at Geo Librarian has reviewed a book about Jane Goodall called Me...Jane by Partick McDonnell.

At L. L. Owens Lisa is introducing Space Neighbors, her picture book series of 10 books covering our solar system.
Posted by Alex Baugh at 7:40 AM