From the Archives #29: Comrades of the Air by Dorothy Carter 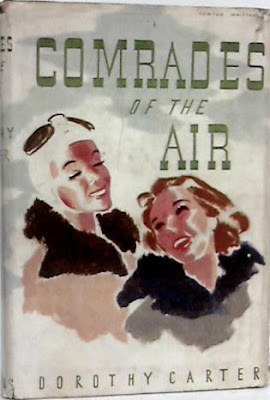 I’ve been laid up with an injury lately and was looking for a comfort read among my old 1940s wartime novels, and just as I reached for The Highland Twins at the Chalet School, I noticed Dorothy Carter’s book Comrades of the Air. Since I have read two books about Russian women pilots in WWII this year, Night Witches by Kathryn Lasky and Among the Red Stars by Gwen C. Katz, I pulled it out instead and decided to reread it - it was not exactly a comfort read but it is exciting.


Dorothy Carter wrote six books about Marise Duncan, a young aviatrix, and her flying adventures. The first three novels take place before the war, and the last three involve Marise in some wartime activity. In Sword of the Air, for instance, Marise is ferrying planes to France and finds herself spying for British Intelligence by working in a Messerschmitt factory (and becoming fluent in German rather quickly). In the third book, Marise Flies South, she is flying bombers to Australia and finds herself tackling the Japanese. Both of these books are difficult to find and when you do, they usually cost a fortune. I don't own either one.

Comrades of the Air is the second of the wartime novels, also hard to find, and also expensive. The story begins when Marise discovers that some of her male pilot friends are leaving for Russia on a secret mission. Marise’s dad works for British Intelligence and is away somewhere on assignment, while her mom stays home taking care of some evacuees. Not to be left out, Marise convinces her superiors that she is quite capable of ferrying a much needed plane to an aerodrome in Russia. The Russians are short supplies since since the Nazis are attempting to invade Russia.

Arriving at an aerodrome near Moscow, Marise meets siblings Katya and Ivan Vanevska. Though neither are pilots, the do fly combat missions, she as an air gunner, Ivan as a navigator. And much to Marise’s surprise, not only are her pilot friends based at the same aerodrome, but so is her father, Captain Duncan. Unfortunately, their reunion is short lived when the aerodrome is attacked by the Nazis and Captain Duncan is knocked unconscious and seriously injured. After the attack, the four remaining undamaged planes are quickly loaded up with personnel and take off. Marise flies one of the planes with Katya as gunner and Ivan as navigator, and her still unconscious father.

But when the planes are attacked by enemy aircraft, and Marise’s plane is damaged, she is forced to land on the coast of the White Sea. After camouflaging the plane, the group builds a shelter to protect them from the elements and any chance of being seen by the enemy. Food is scarce, so while Ivan is out hunting, he comes upon an enemy outpost. They witness a steamer being attacked by a German U-boat and soon rescue a Swedish woman and her two children, the only apparent survivors.

It now becomes clear that they will have to leave and try walk the 80 or so miles to Archangel. But before leaving, Marise manages to steal some food from the Nazis under cover of darkness. Having built a kind of sledge to transport Captain Duncan, the group takes off. Luckily, the falling snow covers their tracks. Eventually, they run into a woodsman who takes them in and feeds them. After sometime, he leads them to the nearest village, about 15 miles away. Unfortunately, the village is occupied by Nazis, who are stealing warm clothes, blankets and food from the villagers to be sent back to Germany. The woodsman returns to his cabin, and sure enough the group is captured by the Nazis. The Swedish woman and her children, however, are sent out into the cold, while the rest of the group is placed under arrest (they are taken in by a woman villager).

Meanwhile, Marise’s pilot friends have finally figured out that her plane never arrived after the evacuation of the Moscow aerodrome, and decide it’s time to start searching.

Having pillaged the village and rested, the Germany convoy is ready to leave, and the plan is to send their prisoners to Germany to be questioned by the Gestapo. Under heavy guard, it looks like there is no possibility of escape, especially with Captain Duncan so badly injured. But, when a plane is spotted overheard, Marise guesses from the way it is being flown, it can be no one other than her friend Jim Grant. Flying low, the plane causes considerable damage to the convoy. Unfortunately the plane is also shot down and while everyone else assumes the pilot is dead, Marise is convinced that if it is really Jim Grant, he has survived. Thanks to the attack and damage, the Nazis are distracted trying to get things up and running again, so a plan is formulated for Marise to escape the lorry they are being held in to look for Jim.

Sure enough, Jim has survived and Marise finds him. The two come up with a plan to rescue Captain Duncan, Katya, and Ivan using ammunition Marise had taken from a damaged lorry. Marisa finds her way back to the lorry with the prisoners, and the plan is that she will drive it away from the convoy as quickly as she can, while Jim uses the stolen ammunition to attack the Germans. It all going according to plan, but suddenly the noise from the attack stops and there is again the fear that Jim had been killed. But no, Jim had radioed the aerodrome when he saw the convoy and given them directions to it, not knowing that Marise and the other were also in one of the lorries.

Far fetched as it sounds the plan actually works, the Allied bombers attack the convoy and everyone escapes with their lives. Back home in England, Marise tells her mother that going through the experiences has with Katya and Ivan, they are now comrades - comrades of the air.

Although Comrades of the Air has a pretty preposterous plot, it is still a fun, fast novel. Carter seems to have been aware that women pilots in Russia, unlike their English counterparts, took part in combat, information Marise is surprised to learn. Interestingly, Carter never refers to Russia as the Soviet Union, even though the Revolution is mentioned, and Katya is an enthusiastic supporter of it and a true comrade.

Dorothy Carter, whose real name was Eileen Marsh was a prolific writer who wrote under a number of pen names.  According to Stephen Bigger’s post about her on his blog 1930-1960, Eileen Marsh wrote 120 books between 1935 and 1948 under 16 different names. You might also be interested in Stephen's blog post about Comrades of the Air, too. If you even see any of the three wartime Marise Duncan novels at a reasonable price, you might want to snatch them up.

This book is recommended for readers age 10+
This book was purchased for my personal library
Posted by Alex at 2:11 PM