The Night Garden by Polly Horvath 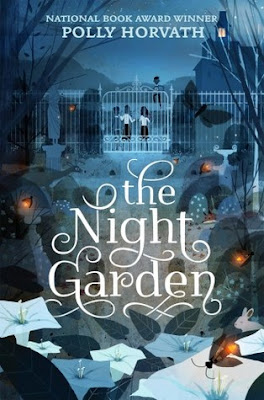 It’s early spring 1945. In the small coastal town of Soote, on Vancouver Island, British Columbia, the kids have been given their summer vacation in the spring while the roof of their school is being fixed. Which is OK by twelve-year-old Franny Whitekraft, who’s very content to hang out at home with her adoptive parents Sina (short for Thomasina), a sculptress, and Old Tom, who loves nothing more than to tend to his many gardens on their 270 acre farm, East Soote Farm.

So far, the WWII hasn't really impacted their lives except for the soldiers located on their property. That is, until Crying Alice Madden arrives and manages to talk Sina into watching her three children, Winifred, 11. Wilfred, 9, and Zebediah, 6, while she goes to Comox to see what was going on with her husband, Fixing Bob. He's a mechanic in the Canadian Air Force, who is in charge of the Argot, an amazing top secret plane that can stay in the air for hours beyond any other plane. Crying Alice is sure he is up to something he shouldn't do and hopes to stop him from making that mistake, whatever it is. Into this mix comes Gladys Brookman, a young woman interested in bebop and men, and hired as a cook while the Madden children stay at East Soote Farm.

Soon things settle into a routine. Franny and Winifred begin to hang out together, Old Tom and Wilfred work in the fields planting potatoes together, and Zebediah seems drawn to the cabin of a hermit that is allowed to live in the woods on the farm. But pretty soon, it becomes apparent that Zebediah is writing to his father, and not sharing the letters he receives back from Fixing Bob with his siblings. Winifred is consumed with a desire to find his letters and read them, but when she and Franny finally do find them, she doesn’t know what they say.

Meanwhile, Franny relays the story about the night garden to the Madden kids, the one place that no one is allowed to enter. The night garden grants one wish per person, and the wish cannot be undone, often leading to complications and serious consequences for the wishers. Naturally, when he discovers just what Fixing Bob is up to, Zebediah, who shares his father’s love of planes, wants nothing more than to join him doing the thing he shouldn't be doing. Before anyone can stop him, Zebediah is over the locked fence of the night garden and then just gone. To try and temper things, Winifred, Wilfred, and finally Old Tom do the same thing and as a result, things get really complicated and zany ( though I’m not sure zany is a strong enough word for what follows).

The Night Garden is actually a fun book to read with all kinds of quirky twists and turns, yet never so complicated or so complex you forget who is who or what has happened. It is narrated in a very straightforward voice by Franny, an aspiring writer who has a pretty good grasp on exposition. And her timing is perfect, revealing information only as it is needed.

The story actually starts with the story of just how Sina and Old Tom managed to acquire Franny, and the ending circles back to this story in a very interesting way. As you read, you may recognize elements of other stories - orphans, magic gardens, hermits who know things that make you wonder how they know them and Horvath has woven these into her story so they are recognizable, but still original. And despite the realistic setting, this is not really a war story, or, for that matter, even historical fiction despite the time it is set in. There are some anachronisms, but the story is basically fantasy, so maybe, since they aren't biggies, they don’t really count here. Instead, think of this as a rather, a unusual adventure about family,and love with a good dose of magic thrown in.


The Night Garden is a fun book that should appeal to anyone looking for a bit of whimsy and anyone who is just looking for a good story.

This book is recommended for readers age 9+
This book was an ARC received from the publisher
Posted by Alex at 10:28 AM