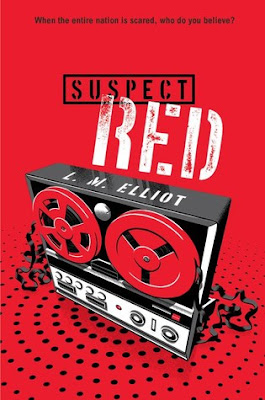 It’s June 1953, the Cold War is in full swing, Julius and Ethel Rosenberg’s have just been executed on charges of committing espionage, and under the influence of Senator Eugene McCarthy (R-WI), certain books deemed to have secret communist themes are being removed from the State Department, and overseas embassies.

Now, though, summer vacation has just begun and Richard Bradley, 14, can finally get away from the bullies at school and lose himself in the pile of books he’s put together, beginning with a reread his favorite Robin Hood. Well, until his mom takes it away now that it has been determined too subversive, and she would know, since Richard’s dad is. K a G-man, working for the FBI under J. Edgar Hoover, who seems to agree with everything Senator McCarthy says. But Richard’s father also is suffering from PTSD as a result of his wartime service, and Richard seems to be the only one who realizes it. And he is trying to redeem himself after a failed FBI mission that Hoover blames him for.

When Richard and his mother visit a new neighbor,Teresa White, from Czechoslovakia who’s married to an American in the State Department, he meets her son Vladimir, a confident 14 year old who had lived in Prague and London during the war. Vladimir is a musician at heart, but he’s also an ardent reader like Richard, and though his taste in books is more sophisticated, he’s also willing to lend his books.

The two become friends, and while everyone in the White family is rather bohemian in their taste for art and left leaning politically, Richard soon begins to notice some suspicious things regarding Vlad’s mom. Perhaps he has been reading too many books like Herb Philbrick’s FBI espionage novel I Led Two Lives, but soon Richard is sure Mrs. White is involved in some kind of spying. Not sure what exactly it is all about, he talks to his dad, who advises him to think like a G-man and report back to him if he notices anything suspicious.

It’s exciting to think of himself as a spy, but Richard also feels disloyal towards Vlad. When school begin in September, Richard is sure Vlad will leave him flat and make friends with the other boys. While he is relieved when that doesn’t happen, Richard is still wrestling with his conscience about spying on Vlad’s family when he notices what appears to be really incriminating evidence. Telling his dad what he observed, Richard realizes that for the first time he and his dad are having the kinds of talks he has always longed to have - real father/son talks.

But when Vlad tells Richard in confidence what is really going on with his mom, Richard knows he has to tell his dad. But is it too late for that?

Suspect Red covers one year, from June 1953 to June 1954. It’s an important coming of age year in Richard’s life, where he learns the meaning and value of a good friendship and the consequences of betraying it, and in the life of the United States, when it allows itself to be influenced by one person with an agenda. The chapters are done by month, and each one includes documentary information at the beginning, relating to the politics of that month.

Richard was a very interesting character. I could see where he is standing with one foot in the kind of conventional life style his parents have and one in the unconventional life the White family lives, and trying to decide where he belonged. Both life styles seem to appeal to him. Luckily, McCarthy started to lose his hold over the US in 1953, so I could imagine Richard finding a way of blending of the best of both. Elliot is also spot on with her depiction of kind of indecisiveness and questioning Richard is wrestling with, as well as he struggle to figure out what the right thing to do is. And it's all muddied by his desire to have a relationship with his dad.

Pay attention to Ginny, Richard’s 9 year old sister. She has courage, confidence, and charm and her ambition is to become an Inquiring Camera Girl a la Jacqueline Kennedy. Besides Kennedy, Ginny has also managed to befriend Ladybird Johnson, and she’s culled lots of helpful information from a bunch of Washington’s other elite women. A novel about Ginny would be very different than Richard’s story.


On the whole, I though Elliot really captured the communist paranoia that gripped people during these early years of the Cold War. These lots of little details to add to the story and give it a certain realistic quality. I can remember my parents talking about how terrible McCarthy and the Senate hearings he held were, even years after they were over.

This book is recommended for readers age 10+
This book was an EARC received from NetGalley
Posted by Alex at 1:00 AM